"A Hologram for the King" Review

December 08, 2016
“Have you ever wanted to know how it would like if a good actor plays on a shit-hole movie, and by shit-hole it means that the movie is extremely disappointing?” For that question, my answer is definitely yes, and if you also have the same answer as I do then I’ll tell you one movie tittle (of course it’ll be followed by my “lame” review. So embrace yourself!) that will quench your thirsty feeling of watching how a movie can ruin a reputation of a good actor. The movie that I am going to present to you is “A Hologram for the King”. 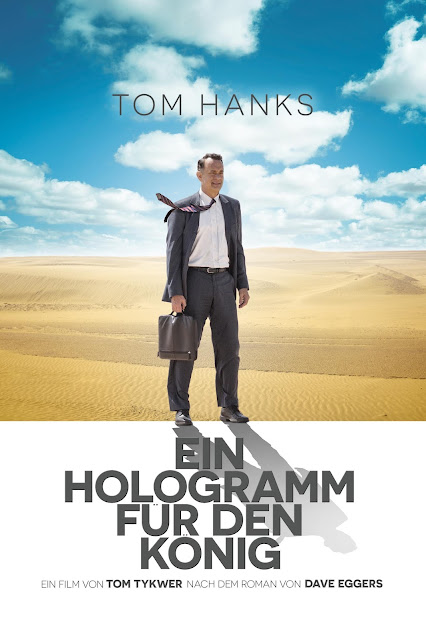 “What?”
Yes, that what I said the first time I read the title but thanks to the good actor that eerie tittle can a little bit sound “normal”. Alright before I “dissect” the internal parts of this movie, I’ll introduce who the good actor I have mentioned is to you. Well, he is “Tom Hanks”. Yeah Tom Hanks, who doesn’t love Tom Hanks? Everyone loves Tom Hanks except Samantha Lewes, L-O-L. And to be frank, the first time I saw the poster of this movie, my heart pounds so hard that I can’t hear my own breath. What crossed my mind is that ‘Wow, I just watched him in “Inferno” and now I get a chance to watch his another movie, freely (FYI, I download this movie illegally on a website but f*ck it who cares lol!) it’s surely gonna be amazing!”
Then how’s the movie homie?

Well, I am going to tell what the movie is about. So the movie begins with a scene showing Tom Hanks (in this movie he becomes “Alan”) was riding a roller-coaster with a frightened face then it changed into a situation in which he woke up in a plane full of Arabic men wearing a pilgrim cloth and reciting some Arabic words (for real, I don’t know why the movie showing this, all passengers were Arabic and all of them reciting the Arabic words. And I started to wonder if it really what happened when you fly to UEA), then it shows that the plane was flying above a wide carpet of sand also known as desert. Later we know that Alan are flying to UEA.

Upon his arrival in UEA, the movie present us with a scene when Alan overslept and he woke up in panic. He then phoned or being phoned (by) his friend or his coworkers. His friend worried about how Alan could travel to work during his time in UEA. Being offended on the worrying tone of his friend, then Alan decided to sort the travelling problem out by himself. Next, we found out that Alan phoned (I don’t know maybe a travel agency responsible for his being in here) a man named Edward then he asked where Edward was. And you know what? What Edwards responded to Alan’s question just put me in a smile and I a bit in bolt out of the blue. He said he was from ‘Jakarta, Indonesia”. Then Alan was shocked as well and he said “Jakarta, Indonesia”. Maybe Alan thinks that how could he phoned someone that was expected to figure the solution of his problem out when that someone was million miles away from him, LOL. (P.S. I swear in the name of my late cats that Edwards just sounds Indian, what the EF).

Then, after a very short convo (maybe because Edward is Indonesian LMFAO) Alan learned that he couldn’t drive a car by himself because he didn’t have an international driving license with him. He then was asked to hire a driver. Alan the prepared for work and after a while he was ready and heading to hotel lobby to wait the ordered driver. On the way to the lobby, Alan met with three Arabic men and as Alan greeted them by saying “morning” those men seemed to ignore Alan for they were busy playing game on a tablet, SMH…. (I think this movie is trying to build a stereotype that Arabic people aren’t used to greet with strangers and they would ignore the greeting if it happened or maybe this movie shows the fact that really occurred there, IDK guys).


Finally, Alan met with the driver, his name is Yousef (never heard Arabic man name Yousef tho, I think they will choose “Yusuf” over “Yousef” IMHO) that apparently speaks fluent English. Then from the conversation happened between them I learned that Yousef spend one year studying at Alabama because he got one year scholarship in Birmingham (I don’t understand this part actually) and for that reason only I also started to wonder whether “spending one year studying in English-speaking country” will make you speak English natively LMAO.
Okay, then there is a propinquity built between Alan and Yousef because it is told that Alan always woke up late so that he needed Yousef as his personal driver. In the story it’s told that Yousef got his own problem which is he was threatened by another Arabic man whose wife was closed to Yousef. Although there is nothing happened between that man’s wife and Yousef but Yousef told that he was afraid as he could still be killed for that. Then in the movie it is told that Yousef ran away from the city to his father’s home in a mountain near Mecca and Alan was accompanying him during the run way.

“Is that it?”
You may asked that question. Well I will answer “partly-yes” because half of the movie’s duration is consumed by telling about Yousef problem. But there is also another story in the movie. The story is about Alan that was in UEA because he got a project to do with the King of Saudi Arabia. And as he arrived for the first time in the place where he was supposed to work, Alan was surprised as he learned that he and his teams had to work in a tent, in the middle of desert. LMAO (Again I wonder if it is just a stereotype or it is just how Arabic rich men treat foreign workers).

As problems related to his project occurred, like lack of Wi-Fi signal and the “shortage of food” provided, Alan started to feel pessimistic about the project but as soon as he meet a Dutch consultant, which is woman and also working for the King apparently, his enthusiastic spirit was back to its pace. Alan started to hang out with her, and like a mainstream Hollywood comedy movie, it is not comedy until it shows boobies and cockies (if you know what it means), the Dutch consultant took Alan to a “secret” party in a Dutch embassy where there were lots of horny goats (LMAO, they were all wrinkle-faced people nothing young and don’t blame me if I don’t get hard, oops!).


But the project’s problem isn’t sorted out only by going to a wild party. As soon as he woke up in the morning with a hangover, Alan learned that he got one more problem, which he is he had a benign tumor on his back. Yousef (Hope you still remember who he is) then initiatively took him to a city hospital. And here, Alan met with a doctor, played by Sarita Choudhury (she is the one who became the assistant of President Snow in Hunger Games), and later they were getting closer and developed mutual love (Urghhh!!!!! Sometimes good movies are ruined by love stories and here I learned that bad movies are too, LMAO).

How’s about the project?
Well, as we can guess since the beginning of the movie, the project , which is making a hologram for the king so that the king don’t have to fly to a country to meet his clients and so that the king don’t have to have a threat by having face-to-face meeting, is finally succeed. And you know what? To my disappointment, the part of the movie focusing on telling this project is just a little, not to mention that the title use the word “hologram”. And to my disappointment again, the theme of this movie which is telling about making hologram is a horribly lame. I mean how can you make “a hologram”, which is just a trash in Inferno or in Angel & Demon, become a big thing in this movie.

IMHO
Well I am not going to tell you about the MEH parts of this movie because this movie is already all MEH. And if I were to give a score (I hope one day I have so big power and influence that I can really give real score for a movie. Say Amen please!) to this movie, I would give 5, lower than the IMDB’s score, which is 6. I really don’t recommend you to spend your internet quota downloading it and then waste you precious time watching this movie ruining Tom Hanks’s reputation.