The Conjuring 2 (Review): When Nun-outfitted Ghost Attacks the British Family

June 27, 2016
I was having “Bukber” last night with my friends in a mall near my rent house, and then we decided to continue to watch a horror movie that is being widely talked around the town. You must know what the movie that I mean. Huh? Finding Dory? No, off course! Well Finding Dory is still horror movie though but that is not the one I am talking here. The movie about which I am talking is The Conjuring 2. Well, right. In this post, I am going to have a review about the movie that cost me Rp. 40.000. Have a read! 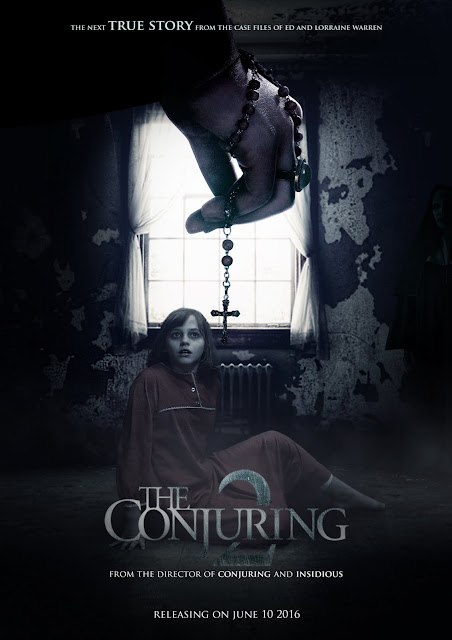 1.      What is the movie about
The Conjuring 2 is talking about the haunted house inhabited by Hodgson family. Hodgson family itself is a poor family living in a rented house. The family whose father moved with another woman consists of 5 members which are:
·         Peggy Hodgson       (The mother)
·         Janet Hodgson        (The daughter)
·         Margaret Hodgson (The daughter)
·         Billy Hodgson         (The son)
·         Johnny Hodgson    (The son)
The haunted story happened in 1977. It began when Janet tried to play Ouija board with her older sister, Margaret. As they played the board believed to be able to call the spirit, they found nothing. Both of them did not see or feel the presence of the spirit. Janet, who asked Margaret to play the board in the first place, looked disappointed. It is maybe because she was afraid to be said an imaginative girl by Margaret. But then, Margaret showed her support and compassion by saying that it was okay if they did not feel the spirit’s presence because Ouija board is just a stupid game.
On night, in the midnight to be exact, Janet suddenly awoke from her sleep and found herself lying in the family room near a rocking chair. Meanwhile in the room, her sister, Margaret, also awoke and became puzzled as she did not see her sister on her couch. While she was still looking around the room, hoping to find her sister, suddenly she heard loud bang from the room’s door. Margaret thought that it is Janet who banged the door so she got up from the bed and walked toward the door. As she opened the door, she found Janet in front of the door with her sleepy eyes walking inside the room. And as Margaret asked why Janet should bang the door that loud, Janet’s answer will a bot shock the audiences. She said “I don’t”
Since then, the terror haunted the family. If we usually see in mainstream horror movies that ghosts or their terrors will only appear at night or at (in) dark, you will find a bit different things here in the movie. The ghost still terrorizes the family even in the day when there are a lot of light. (So for Indonesian audiences, it will, maybe, shock our faith about ghost. We, all this time, believe that the ghosts are of afraid of the light so they will never be present in the bright-lighted places). And also, if we usually see that ghosts will only appear to one particular person but the same thing did not happen in this movie. The ghost is very “brave”, “Overly brave” maybe to show himself or to advertise his presence to all people, even when there are a lot of people in the room.
Afterwards, being desperate of the constant terror, the family with the help from other people sought help to Roman Church. Meanwhile, knowing that a family in London needed help, Roman Church contacted Ed and Lorraine as they were the church agent and demonologist to investigate whether the terror happened in the family was real or it was just a hoax. The church would only agree to help if the family was proved not to fake anything related to the terrors.
Ed and Lorraine then came to England, all the way from America. Then, what did Ed and Lorraine find in the house? Did they find the terror is entirely hoax or it is real? Will they be able to save the family? If the ghost is real, whose ghost it actually is? Why did the ghost (if it is actually real) haunt and terrorize the family?
If you are eager to seek the answer, now grab your wallet or prepare your credit card and buy the ticket while it last, and prepare to watch the most frightening and scare-the-pant-off movie of the year. Even IMDB give 7,8 point to the horror movie. Quite an achievement, innit?

2.      What I like about the movie.
Hmm…. When asked about what I like about the movie, the first thing I would like mention is “It is British-based movie”. When I saw the first five minutes of the movie, I felt that this movie will be going to be the same as the previous series. Yeah, there is nothing special about the movie except the horror it presents. But, when the scene of two school girls smoked and talked in an accent that it is impossible for me to get it wrongly guessed. I became thrilled and I would be like “Really? Really? Really? Yay!!!.” Its setting is in London with its British people and the time setting is in the 70s. What can I ask for more? 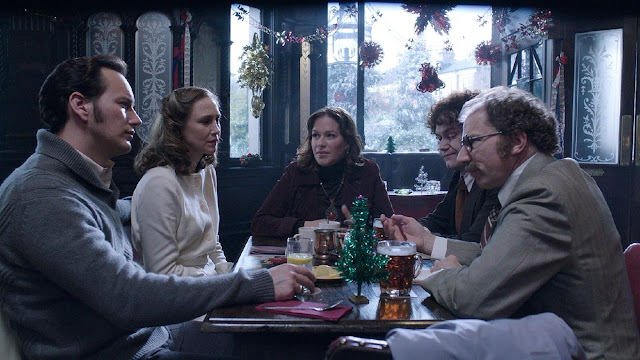 What do you expect when you are watching a horror movie? Some maybe expect scary ghosts, some maybe expect heartbeat-stopping scene, while others maybe expect a stirring ghost appearance. But, how about jokes? None of us may expect it or if there are, maybe just a very few. But in this movie, you will find what we did not expect or least expect. Yes, jokes! Joke is another thing what I like from the movie.
Well, some of the scenes in this movie successfully “invent” laughter of its audiences, like the scene when the police officers with their brave acts come to the house and investigate it. But when they heard bang in the wall and saw the chair moving by itself they hurriedly walked out of the house and said “Well it is beyond our ability “.
Another funny part of the movie is when Ed and Lorraine tried to call the spirit that possessed the Janet’s body. When the ghost is successfully called, Ed asked “you know me?” and then the spirit said “Yes. Ed. Edward. Eddie?” Ed then said “Just Ed. Ed is fine.”
Oh ghost! I never expect this thing will come, and so do other audiences in the theater I think. All people are laughing.
Besides British-based setting and jokes, another thing that I like from this movie is the song used in this movie as soundtracks. It is only me or every British-based movie always has good songs. I mean I know
·         The Village Green from Hot Fuzz movie
·         Don’t stop me now, if you leave me now, the blue wrath from Shaun the Dead movie
·         All day all night, The end of the world from The boat that rocked movie
And now I know Don’t give up on us, Don’t worry Tracy, and Can’t help falling in love from this movie, The Conjuring 2. I even shed my tears (even a little) when Ed played the guitar and together with Hodgson family sang the “Can’t help falling in love” song. Oh ghost! The feeling when I heard the song. It really mesmerizes me and it takes me away to the good ole day (I am still 24 years old though).


3.      What I least like and what bewilder me from the movie
“Every system has its flaw.” Well that is what Beetee said in Catching Fire. And what Beetee said also fits when it comes to a movie. Every movie has its own flaw and so does The Conjuring 2. These are some parts that keep me puzzling:
I.            Who is actually Valak?
The movie shows me that Janet possessed by a ghost who is actually 72 year-old man but in the end of the movie the ghost changed into Valak, a nun-outfitted ghost (sorry it is a spoiler). The question is “who is actually Valak?” Why is she (I assume it is she) in nun outfit? Is she human in the past? Or is she purely demon? What is her connection with the 72 year-old man?

II.            What is connection between Amityville’s murders with the Hodgson family?
In the first five minutes. It shows that Ed and Lorraine was in Amityville to investigate the murder happened in the house. While Lorraine was in her dream and transform into spirit world, she encountered a very frightening ghost that is later known as Valak. Then, while she investigated the Hodgson family, Lorraine also saw Valak. Then the question is…
Who is Valak (again)? Is Valak always present in every terror happened in a family? What is the connection between the murders in Amityville with the 72 year-old ghost? Why does Valak present in these cases?
The next things that confuse me are…

III.            How can Valak travel from America to London in a very short time? Is there only one Valak? Or are there a lot of Valak so that there will be American Valak and British Valak? Haha… I am joking about this one.

Alright, at last, this is what I can write about The Conjuring 2. To sum up, this movie quite good and worth watching. For you who is thirsty of a good horror movie, you should come to a theatre now and watch this movie or you can buy its blue-ray DVD and watch it alone at your house. Either way, I hope you will be enjoying watching it and I also hope you are enjoying reading my post. Alright, it is time to go! Have a good day! See you later!