The World's End || The End of the Cornetto Trilogy, which a bit confuses Me!

April 24, 2016
Well, I just saw a movie called “The World’s End”, which is a very intriguing movie if we look from its title. And FYI, I know this movie as a part of Cornetto Trilogy after I watched Shaun The Dead, which is actually the best movie of the movies in trilogy 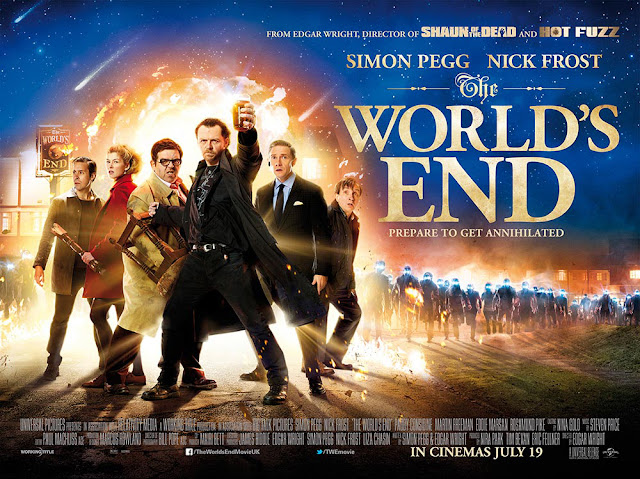 WHAT IS THE MOVIE ABOUT?
Well the movie is about an “adventure” of 5 musketeers-they referred themselves to it, to their hometown. They want to visit to their hometown to complete a mission they started when they were younger but never seemed finished, which is to drink beer until ‘The World’s End” bar (There are many bar in the town and the last bar to visit is “The World’s End’).
The adventure idea was actually articulated by Gary, which is the leader of the 5 musketeers (Gary, Andy, Oliver, Steven, Peter). At first, none of Gary’s friend agrees of the idea as they think that they are already old and busy with their own life and there is no use to finish silly thing they started when they were young. Also, when they were asked by Gary to join the plan, each of them always ask whether Andy want to join the plan or not, but as Gary asked them compellingly and also reassured them that Andy will definitely join them, they then agree on it. You must be curious why Gary’s friends always ask whether Andy join the plan. Well, I am not going to explain it here, you can find the answer by watching the movie.
The adventure began, they drove a car to the hometown. As they reached the hometown and started to drink at the first bar, they got confused as there no one knew them, and for their shock no one barely knew Gary King despite the fact that he was very popular when he was young. They become more and more puzzled when they accidentally fought with bunch of teenagers that were actually robots whose blood is blue. Later, they learned about something unexpected happened in their hometown, and also the reason of the strangeness happened around the town.

WHAT I LOVE ABOUT THE MOVIE
Well, for me, the movie is quite interesting. I have always loved the theme brought into the Cornetto Trilogy movies. It’s always been a hometown, a beautiful small rural town full of friendly people. The movie’s also features mostly the same actor from “Shaun the Dead” and “The Hot Fuzz”. I always love the detail presented in the movie that encourages us to think while watching the movie. The songs used in the movie are also classic and easy listening, it always makes me to open Shazam to find what the song is out.
Note: I have waited for the Cornetto to appear in the movie but it didn’t seem appear until the last minutes of the movie. And when it appeared, I was like, LOL finally, the Cornetto mission is completed
WHAT IS ERR ABOUT THE MOVIE
Despite the good thing I mentioned above, there are some parts of the movies that confuse me. Such as the part how and why Oliver turned into robot and why Gary and others didn’t notice from the start. Also the part of the movie that doesn’t tell who actually behind the robot invasion is. Is it alien, is it bunch of crazy scientist, or is it Satan? Well it not even mentioned in the movie unless I miss that part. Then, the silliest thing about the movie is that when the leader of the robot (well I assume it is the leader because it talks and challenges Gary to argue) decides to leave the town and stop turning people into robot just because it is outargued by Gary. What a silly thing to do. I mean, COME ON!!!!!!!!
But then, when I realize that the genre of the movie is also comedy, then it can be forgiven. LOL

Well thank you then for coming by to my blog. I hope my short review of the movie won’t undermine you from watching it. LOL. See you later mate, and have a good day!