March 26, 2016
Once there in a village in Bali, there lived a good-looking man named Manik Angkeran. Manik Angkeran was a son of Empu Sidhi Mandra. When he was child, Manik spent his boyhood by playing with other boys in the village. Unfortunately, he didn’t seem to carefully choose those who he would spend his day by playing with. He had many bad friends that would give him bad influence. Manik grew up as a man that liked to gamble. And as his parents noticed it, they started to worry. 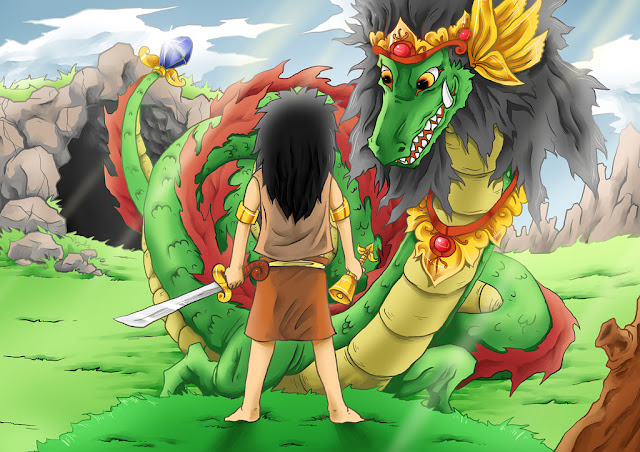 “My Son, I have noticed lately that you have always spend your day gambling with your friends” said his father in one occasion “Don’t you realize that what you have done is not giving you any beneficial effect toward your life neither is it making your life better. Just stop gambling!”
But, as his father done talking, Manik would leave home and still continued his bad habit. Almost every of his day was spend on the gambling place. He would never help his parents with their jobs.

One day, as he knew that his son didn’t follow what he ordered, Empu Sidhi gave Manik an ultimatum. Empu said to him “If you cannot bother yourself to listen to me and you cannot and don’t want to stop your destructive habit, It is better for you to leave this house”

Instead getting afraid of the ultimatum given to him, Manik accept what his father’s threat and he decided to leave home. He couldn’t resist not to gamble even for a day. But as Manik prepared himself to leave home, Empu Shidi stopped him. He said that he wouldn’t kick him off the house but he would take Manik to a Brahmana instead. The Brahmana whom Empu Shindi intended to meet was Brahmana Dangeang Nirata. Or also known as Pedanda Bau Rauh. To him, Empu Sidhi entrusted his son and he asked the Brahmana to teach him life values and stop him from gambling.

Did Manik stop his habit after living with Brahmana?

Unfortunately, No! He still played gambling every time he had a time and chance to sneak from the Brahmana house. Knowing that Manik wouldn’t quit his habit, the Brahmana tried to find a new way that would make him stop. Then one day he said to Manik “Started from now on, you should do some ritual, which is medicating. You should do it as I see that you still do gambling. I need you to repent to God and ask for His help and guidance so that you could quit gambling.”

Manik agreed with the brahmana advice and he started in Pura Gua, which’s located in a left side of Pura Besakih. In the first day, Manik successfully focused on his meditation, and so did he in the second day. When it came to the third day, Manik got a feeling that he was about to be visited by a dragon.  Manik, then, tried to be more focus in meditating, not because he wanted to extinguish his habit but because he wanted to meet the dragon and he wanted to be given a power that enable him to win on every gambling.

Then, in the middle of Manik Meditation, The dragon appeared. The dragon’s name was Naga Besukih. As it appeared in front of him, Manik got scared. His body was shivering and he was profusely sweating.

“Be not afraid” said the dragon “I come to see you. I know what you what, and I will give you the power.” Then the dragon disappeared. As the dragon vanished from his sight, Manik decided to go back to the Brahmana’s house. But as he reached the house, he changed his mind. He walked to the gambling place to test to power given to him. And magically, the power did work. Manik won on every gambling he took part on. A lot of money was handed to Manik, but instead of getting satisfied with the sum of money, Manik felt that he wanted to ask for more power to the dragon. He want to own the gambling place. Then he did the meditation again and the dragon gave what Manik requested.

The dragon then turned around to enter to fly and disappeared. And as it turned around, Manik saw a shiny thing on the dragon tail that he immediately recognized as a diamond. Blinded for greed on himself, Manik tried to take the diamond on the dragon’s tail. He, then, using his dagger, cut the dragon’s tail. The dragon went on rage as it knew what Manik just did. He then ran after Manik that already rushed with a tail in his hand. But as the dragon could run faster, it successfully caught Manik and without a second thought, the Dragon killed him.

Few weeks had passed since Manik went meditation. The Brahmana started to feel worry as Manik hadn’t come home. Then he decided to visit the place where Brahmana meditated. As he reached the placed, Brahmana met the dragon that told about what happened between Manik and the dragon. The dragon didn’t know that he was the student of the Brahmana. The Dragon apologized for what he did and he then made Manik alive again. When realizing that he was alive again, Alive felt sorry and regretted for what he had done. Since then, he promised to change and he didn’t gamble anymore.