March 26, 2016
Alright buddy, today I am going to give my brief review about a game, which I have been playing for this 3 weeks approximately. The game that I am talking about is “Clash of Royale” I don’t know whether it is “Royal” or “Royale”, and I also don’t understand what the difference of those two words. Okay, let’s not make it a matter. 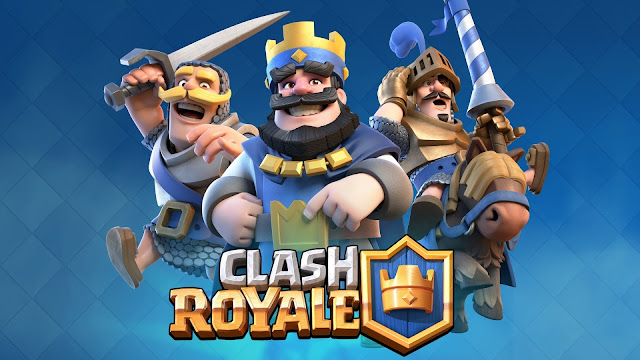 What is the game about?
The game, in my opinion, actually looks a bit same with Clash of Clan. They have the same characters, not all, but some of them are. They have almost the same opening song, I mean the song, not actually song but the ringtone (oh God I lost my word in English) played by the time we open the game. Besides that, they also have the same “gem” and “gold” and all those expensive prices to purchase (for me) LOL.
Well, the game provides us with a simple yet interesting head-to-head battle that is done online. It means that you have to be online and so is your opponent, unlike the clash of clan, where you can’t attack your opponent as they are online. Well, it is pretty intense though, because while you are attacking them with your troops and heroes, you will never know what a kind of troops and heroes your opponent is going to summon. And FYI, you will only be given 8 cards in every battle.
There are some arenas provided in the games, called as Arena 1, Arena 2, Arena 3, and so on. And you will get different heroes or troops in each arena. And to get a heroes or troops you will need a card, and to upgrade them you need the same thing.

The Characters and My Opinion about Them
Well, there are plenty of characters available in this game, and as I am now still playing in arena 3, I haven’t unlocked all the characters yet. So I will tell you the characters that I have in my battle deck and those that I know. The characters are: 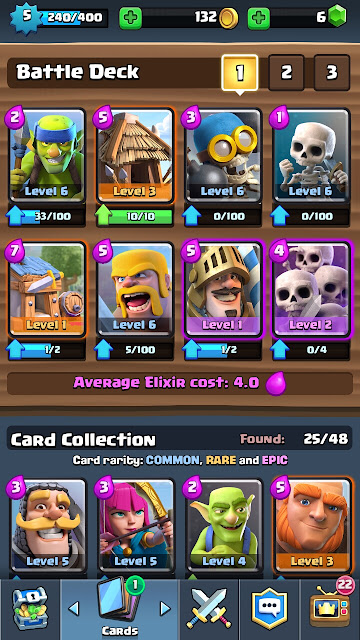 Please refers to picture beside while reading the explanation below.
The characters (from above left to right. Only the cards on the battle deck)
1.    Spear Goblin
My favorite cards, it summons three goblins that attack with their spears. They can attack enemy on ground and air. They are easy to die. Awwwww.
2.    Goblin Hut
It is a hut of Spear Goblin. It can summon Goblin continuously for a minute. What after a minute? The hut will destroy itself. Awwww
3.    Bomber
Bomber is a skeleton that brings a bomb that he will throw to the enemy and build near him. While the bomb gives a deadly effect, this cute little thing is easy to die. Only need 2 arrows to make him vanished from this world. LOL
4.    Skeletons
Yes, it is skeletons LOL. The cheapest card ever. Why? Because you only need one elixir to summon it in the arena. When it is summoned, it will give you 4 easy-to-die- skeletons that run fast. Well, as long as it is cheap, why not? LOL
5.    Barbarian Hut
The most expensive card to summon for me until now. It costs me 7 elixir, OMG. But it is worth to have though. When it is placed in the arena. It will simultaneously give you 2 angry strong barbarians for a minute. What will happen after one minute? Ask “Goblin Hut” they have the same answer!
6.    Barbarians
Yeah. The angry yellow-headed strong muscle man with swords. They are afraid nothing. It costs you 5 elixirs but in returns, you will have 4 attacking barbarian for you.
7.    Prince
Yeah the handsome mustached prince, which looks million times older than an actual prince supposed to be. Cost you 5 elixirs. The card will give you a riding-horse prince that bring (a sword???) I am not sure what it is called, because it doesn’t even look a sword. It looks like a firework rocket. But, the sword is really reliable. It can destroy the building quickly. TRUST ME!!!
8.    Skeleton Army.
This army of skeleton will destroy everything quickly, even a giant. Their weakness is arrow and bomb, and also witch. Urghhhhh. It really offends me when I summon this card and my opponent summons which card.

Okay those the characters I am using now in my battle deck, the following is the cards that I have received. 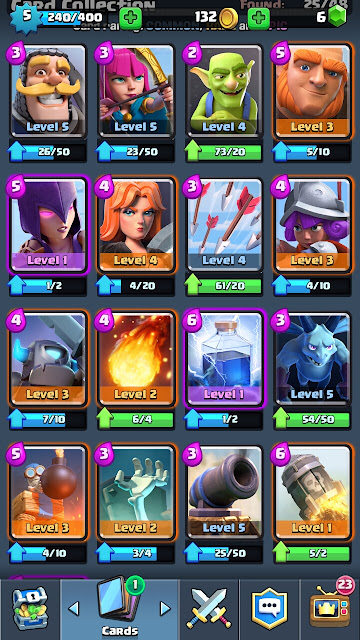 Refers to the picture besides. From left to right.
1.    Knight
Not really special card for me.
2.    Archers
Gives you two shooting pinky-headed girls.
3.    Goblins.
I haven’t used it though
4.    Giant
Big strong giant that only destroy building but won’t attack other than that.
5.    Witch
Sparkling-eyed witch that will give you nightmares if you summons skeletons. LOL
6.    Valkyrie
Hahha, summon this strong card and she will scream in a funny voice.
7.    Arrows
Lots of arrows will fall down from the sky as you summon it.
8.    Musketeer
She bring a cannon, and can shoot from a far distance (not really far but not near, :D)
9.    Mini P.E.K.K.A
This robot will attack you like a truck. Well at least that what this game developer said about this character.
10.  Fireball
Do the same thing as an arrow. But give a big effect for the building that the arrow does
11.  Lighting
Give you lightning attack that will never be forgotten by the enemy.
12.  Minions
They really don’t look like minions that I used to know. I mean the minion on the movie. Yeah this flying goat (well I believe they are goats) will fly and attack from the air.
13.  Bomb Tower
Will give you a tower that occupied by a bomber that will throw to the approaching enemy. Only last for a minute though before it destroy by itself
14.  Tombstone
The tombstone that will give you bunch of skeletons, and only last for 40 seconds.
15.  Cannon
Will give a simultaneous shoot toward enemies, but last only for 30 minutes
16.  Rocket
The rocket will fall from the sky and attack the enemy. Give a really big power if it is compared with arrow and fireball. 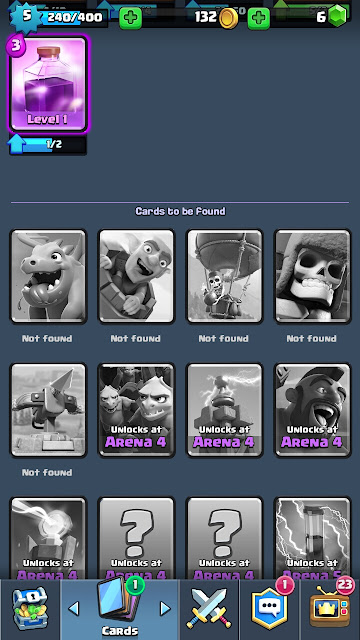 In My Humble Opinion (IMHO)
This is the game that I have been playing for about three weeks without being uninstalled. Do you know what it means? Right, the game is good. If you are a fan of Clash of Clan, I am sure that you will be addicted by this game. The only thing I don’t like from the game is that the game cannot be paused, LOL of course since it is an online head-to-head battle. The other thing is that if we lost our internet connection or if our phone connection suddenly goes off or if your mom is calling you in the middle of the game, I am sorry to say but you will lose the game. Because once you join a battle, you opponent will still attack you though you are not in the arena. So, before you play the game, you really need to make sure your internet connection and your battery and level, and don’t forget to text your mom and say “Mom, please don’t call I am still playing Clash of Royal” LOL.