The Giant who Can't Move (on) || Indonesia Folklore

February 15, 2016
Once there lived an old widow named “Mbok Sirni” that had always wanted to have a child. Unfortunately, his husband didn’t give her children till the day he passed away. She kept praying to God, asked Him to send her a child. One day, a big giant came to her house. The big giant talked to her and said to the widow the he wanted to give her a daughter but under one condition, which was she had to give the child by the time the child grew up. The giant planned to eat the girl up. 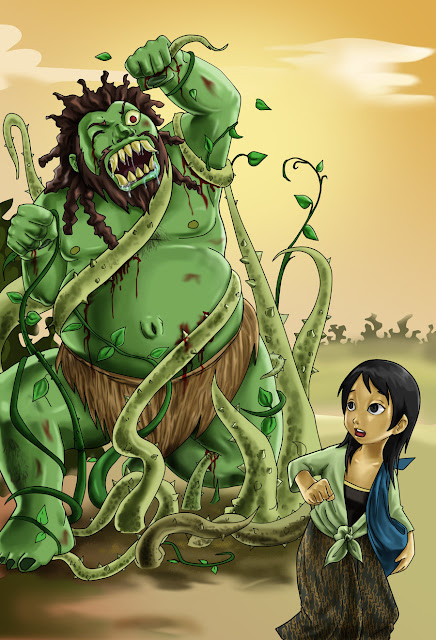 Feeling desperate because had been waiting too long, Mbok Sirni agreed with the giant offer. Then the giant gave Mbok Sirni a seed of cucumber and had her plant it. After being planted in empty area behind her small house, the sprout appeared from inside the soil and grew prolifically and it yielded lot of cucumbers. From those cucumbers, there was a cucumber that appeared to be have a color like gold and have the biggest size among all.

Mbok Sirni then walked out of her house to meet the giant. And she talked to the giant, tried to persuade him not to eat the girl. But she knew that asking the giant not to eat the girl was impossible, so she tried to spin out time by telling the giant that he had better come again next 2 years, as the girl would be growing even bigger in two year and also it would taste more delicious. The giant foolishly agreed with what Mbok Sirni asked, then he walked away from the house.Mbok sirni felt glad when she knew that she successfully bought some time.

Mbok Sirni planned to run way from the village with her daughter to avoid the giant. But she knew that even they ran away, the giant would still be able to scent them. So she decided not to. Every day, Mbok sirni prayed to god and asked Him to give him a sign and a solution to solve her problem. Then one night, she dreamed and in her dream she was asked to go to Gundul Mountain to see an ascetic.

In the next following day, she went to Gundul Mountain and met the ascetic. After having a conversation with Mbok Sirni, the ascetic gave her four small packs. He told her that each pack contained of cucumber seed, needles, salt, and terasi (terasi is kind of dish from Indonesia that is made from shrimp, it is also known as shrimp paste).

Timun Mas ran as fast as she could, but the giant ran much faster. And the giant had been few meter behind Timun Mas. When the giant was getting near her, Timun Mas remembered of her packs. The she took the firs pack out of her pocket and threw it toward the giant. The first pocket contained of cucumber seeds and as she threw them, they turned into a forest. The giant was trapped into a forest but he could easily manage to escape.

The giant then ran even faster. Timun mas now looked worried and she took the second pack and threw it again to the giant. The second pack, which consisted of needles then turned into bamboo plant with sharps leaves. As the giant tried to pass the bamboos, he was injured by the sharp leaves. He was bleeding but still he could manage to escape and he still could run faster.

Timun Mas tried to stop the giant. So, she threw the third pocket containing of salt. It turned into a sea. But the giant could swim over it and was still able to stand on his feet. Timun Mas then threw the last pocket. It was pocket of Terasi, and it changed into a boiling mud, and as the giant tried to pass it, he was trapped and he could manage to escape from it. The mud suck him off, and the giant died in it.

As Timun Mas learned that the giant had died. He then thanked God and tried to find home to meet her beloved mother.