No Mom, I Have Turned into a Bird || Jambi Folklore


Long time ago, in a village of Pelalawan situated in Jambi Province, there lived a couple of husband and wife with their only son named Bujang. The couple lived in poverty but their love had never been less to their son. They worked hard to feed him and also they prayed hard to God, asked Him that one day his son would be growing up to be a great, good and smart man. 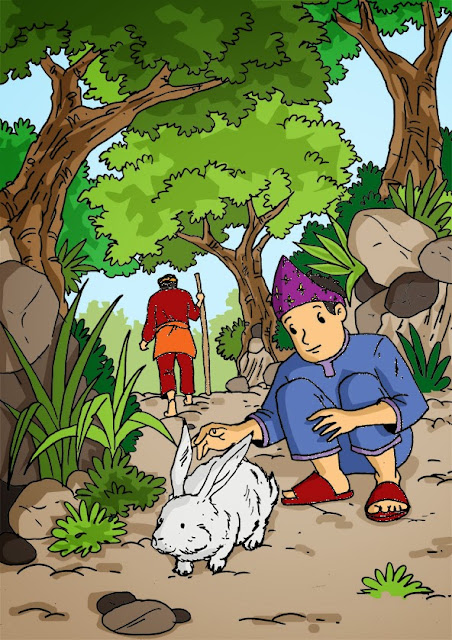 Every day, the couple would go to their rice field and also to the river for fish. The fish they caught from the river would be sold in the market. The market was across the town, they would walk for miles to reach it. It wouldn’t be an easy journey as there would be a lot and heavy fish to be carried with them as they went to the market. Nevertheless, they had never complained about it, instead they had always been grateful. The money they got from the sale would be saved for their son’s future.

A day became a month, a month became a year, and a year became years, Bujang seemed to grow quite fast. Bujang had now become a healthy, attractive young boy. He was so active that his parent would be happy every time they saw him did his activities.

For Bujang’s religious education sake, his parent sent him to the mosque to learn about the Holy Book. He used to go to the mosque with his father, and if his father wasn’t available, he would go with his friends. When he had finished learning from the mosque, his mother would be standing in front of the mosque, waiting him and then walking with him to home.

In Pelalawan Village, there was a game that was very popularly played by kids there. The game was called “gasing’. When the time to play gasing came, lot of kids in the village would play it until they forget everything. They would forget to eat their lunch, they would forget to learn at the mosque, and they also would forget to help their parents at home. And that also happened to Bujang.

One day, in the afternoon, Bujang’s parents was worried as their son hadn’t been home yet. He had gone since morning, he said to his parents that he was going to play gasing with his friend. Their worry was not only caused by Bujang’s habit  that always went home late when playing gasing but also because since he played gasing, he had never come to mosque again. The teacher teaching Bujang at mosque had come to Bujang’s home for several times to ask the reason Bujang had never come to the mosque again.
Then, when the day’s getting dark, Bujang appeared in the front door. His parent has been waiting inside. When Bujang just entered the home, his parents yelled

“Bujang! Where have you been? Have you been playing gasing for all day?” yelled the mother

Then it’s time for father

“You had never come to the mosque again. You had never learned again. You also hadn’t eaten yet for today. What will you become when you are growing up if you always play gasing like this every day?”

Bujang bowed silently. He acted as if he heard what his parents said. While in fact, he never heard that. That night, Bujang was grounded. Their parents wished that by grounding him, Bujang would change their habit.

Unfortunately, Bujang had never changed. It had been 2 days that Bujang didn’t come home. Their parents now wouldn’t care about what Bujang did, because they had already known that Bujang would be playing gasing and staying at his friend’s home. As Bujang’s attitude and habit had insulted his parents feeling, his mother now never cooked for Bujang again. His mother usually cooked for Bujang before she and her husband went to the rice field but now she wouldn’t bother herself to prepare food for their naughty boy. She hoped by doing this, Bujang would change. But as we can guess, he wouldn’t.

One day, because she had already been very angry to Bujang. Bujang’s mother cooked Bujang’s gasing. His Gasing was cut into pieces and then cooked by his mother. And the rope of Bujang’s gasing was cooked as curry. After that, she and her husband went to the rice field.

Bujang just got up from his bed and he came to the kitchen for food. When he moved the food cover from the table, he found food that was made from his gasing. Bujang was sad, and he cried. He would never think that his mother would do that. Bujang was crying, and he was singing in his cry. Bujang kept singing all day, and one by one, feathers come up from its skin, and its body was shrinking. And suddenly, Bujang turned into a green pigeon. And then he flew to the rice field where his parent worked.
As he reached the rice field, he perched in a branch of a big tree. From above, he could see he parent working. He then sang. His father heard the song and he said to Bujang’s mother.

“Did you hear that voice? It’s like our son voice”

“Wait? O.yes!!! That is our son voice! Where is he now? Bujang….Where are you? Come here son! I have food for you. I am sorry I had cooked your gasing. Come here, I know you are hungry”

Bujang then answered his mother

“No mom, I have turned into a bird now. I will eat fruit in the forest now.”

Knowing that their son had turned into a bird, the parents then looked for the bird. They tried to locate where the bird was. They felt guilty for what they had done earlier in the morning. Then they saw a green pigeon in a tree. The mother said

When Bujang had disappeared, their parent realized that they had walked too far inside the forest. Now they decided to go home. But unfortunately, they had never found the way out. Day by day, the parents were still trapped inside the forest while they were getting week as they didn’t eat anything. Until one day, when they could bear the burden anymore, they were falling to the ground with their last breath.
Indonesian Folklore (English Version) Sumatra Folklore