January 12, 2016
Once there lived a beautiful princess named Dewi Sanggalangit. She was from a well-known kingdom located in Kediri. The princess was not only beautiful but also had a pleasant personality that made a lot of princes and kings from surrounding kingdoms wanted to make her as a wife. Unfortunately, the princess didn’t want yet to get married, and this made her parents confused. Her parents had already wanted to have their own grandchildren. Then one day, the king said to the princess. 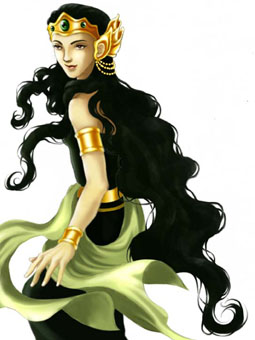 “My daughter, you have rejected so many marriage proposal from princes and kingdoms. Dot you want to get married and have a family of your own?” asked the king

“Father” answered the princess, “I really don’t want to get married from now. I still enjoy of my own company right now.”

“But your mother have said to me that she really wants to have a grandchild from you” said the king
The princess didn’t give any respond as the king finished talking. She went silent for a moment. Then, she said

“If that what you and mother want, I will make it happen. I will accept someone as my husband as long as he meets my requirements” said the princess.

“What is the requirement, then? Asked the king.

“I don’t know yet” answered the princess shorty.

“That sounds odd. How come?’ asked the king confusedly.

“I don’t know. I will meditate in a quiet place to ask God what requirement I should ask to” explained the princess.

Then the princess went to meditate for three days asking for a sign. In the next following morning, after the princess had done meditating, the princess came to her father.

People were so excited when the king gave the announcement but as the king recited the requirement the princess had given, much of them gave the white flag, because the thought the it is impossible to meet the requirement.

Among them, there were two people that still wanted to marry the princess and said that they can find all the requirement needed. They were King Singabarong from Lodaya kingdom and King Swandana from Bandarangin kingdom.

The king was not so pleased when he know that the remaining men was those king as he knew that King Singabarong has a weird and ugly looking as he had a lion head and King Swandana had even more weird personality. It is known that King Swandana likes boys. He thought that boys were like girls. But the king couldn’t do anything as he and his wife really wanted to see their daughter get married.

Then one day, after having done doing his investigation, Iderlaka came to meet King Singabora.

“My king, I have investigated King Swandana”

“So, what have you found” asked King Singabarong impatiently

“I saw that the king had prepared an amazing show that I have never seen before just what the princess asked. Then, he also had collected more than a hundred twin horses”

“How about the two-headed animal. Have he found it” asked king Singabarong worriedly.

“Fortunately, I didn’t see any two-headed animal. I think he haven’t found it yet” said Iderlaka

“Yes, My majesty. I am really sure about that”.

The king was so angry and worried as he heard his opponent almost found all what the princess wanted, while he hadn’t prepared anything yet, not even the show. Then, the King Singabarong planned to attack the King Swandana and took all off the preparation that he had prepared.

Few days has passed since the leaving of the soldiers, and the King Singabarong was getting worried as they didn’t return to the kingdom. Then the king called Iderlaka and asked him to go to the King Swandana kingdom.

After Iderlaka left, the king went to his garden to look for his bird. The bird was a peacock. The bird would perch on his shoulder every time the king came. The king would ask the bird to eat louses that were on his head. When the king reached the garden, the bird then perched on his shoulder and it then pecked the louses off the king Singabarong head. The King fell relax and he then fell asleep.

Without being know by people, or soldiers, or even king Singabarong, a large group of king Swandana soldiers and the king himself were approaching the king Singabarong kingdom. Iderlaka and the previous soldiers sent had been actually killed as they had been red-handed investigating.

“Hey, Singabarong, you have sent your people to steal information about the requirement I had prepared, haven’t you?” screamed the King Swandana

“How dare you” said King Swandana when he noticed that there was something the king’s shoulder and it looked like as though it was a two-headed animal. The king then flew and used his power to attack king Singabarong. As the power hit the king, the king Singabarong and the peacock became one and turned to be an animal. The king then took his whip and whipped it to the animal, the animal then died and the king took it outside.