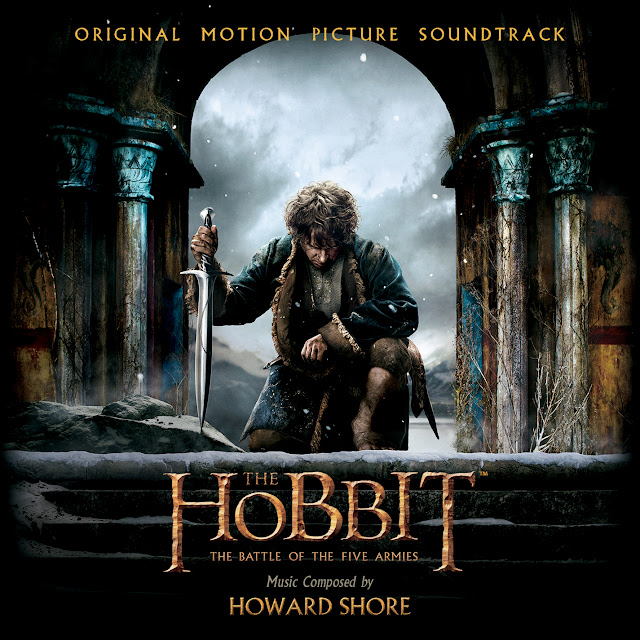 The Hobbit is a film series consisting of three epic fantasy adventure films directed by Peter Jackson. They are based on the 1937 novel The Hobbit by J. R. R. Tolkien, with large portions of the trilogy inspired by the appendices to The Return of the King, which expand on the story told in The Hobbit, as well as new material and characters written especially for the films. The films are subtitled An Unexpected Journey (2012), The Desolation of Smaug (2013), and The Battle of the Five Armies (2014).
The screenplay was written by Fran Walsh, Philippa Boyens, Jackson, and Guillermo del Toro, who was originally chosen to direct before his departure from the project. The films take place in the fictional world of Middle-earth sixty years before the beginning of The Lord of the Rings, and follow hobbit Bilbo Baggins (Martin Freeman), who is convinced by the wizard Gandalf the Grey (Ian McKellen) to accompany thirteen dwarves, led by Thorin Oakenshield (Richard Armitage), on a quest to reclaim the Lonely Mountain from the dragon Smaug (Benedict Cumberbatch). The films also expand upon certain elements from the novel and other source material, such as Gandalf's investigation at Dol Guldur, and the pursuit of Azog and Bolg, who seek vengeance against Thorin and his ancestors.
The first film in the series premiered at the Embassy Theatre in Wellington, New Zealand on 28 November 2012. One hundred thousand people lined the red carpet on Courtenay Place, and the entire event was broadcast live on television in New Zealand and streamed over the Internet. The second film of the series premiered at the Dolby Theatre in Los Angeles, California on 2 December 2013. The third and final film premiered at Leicester Square in London on 1 December 2014.
1.    The Hobbit is a movie which is based on a book whose author is…
a.    Jackson
b.    Tolkien
c.    Peter Tolkien
d.    J.R.R Jackson
2.    They are based on the… (Paragraph 1). The word “they” in the sentence refers to…
a.    The Hobbit books
b.    The Hobbit actors
c.    Adventure series films
d.    The Hobbit film series
3.    The films take place in the fictional world… (Paragraph 2). The antonym of “fictional”
is…
a.    Fabricated
b.    Fictive
c.    True
d.    Imagined
4.    If The Lord of The Ring takes place on 1150, when will probably The Hobbit film takes place?
a.    1100
b.    1210
c.    1090
d.    1134
5.    What did the Wizard want Bilbo to do in the movie?
a.    To join the dwarves’ journey
b.    To take care of the dwarves
c.    To accompany him to meet smaug
d.    To accompany dwarves and smug to the lonely mountain
6.    The role of the dwarves’ leader is played by?
a.    Thorin Oakenshield
b.    Bilbo Baggins
c.    Richard Armitage
d.    Ian McKellen
7.    …who seek vengeance against Thorin and his ancestors. (Paragraph 2). The synonym of vengeance.
a.    Kindness
b.    Revenge
c.    Reconciliation
d.    Anger
8.    …who seek vengeance against Thorin and his ancestors. (Paragraph 2). The word “his” in the sentence refers to…
a.    Azoh
b.    Bolg
c.    Thorin and ancestors
d.    Thorin
9.    How many people that lined in the red carpet on the first premiered The Hobbit film?
a.    1000000
b.    100000
c.    10000
d.    1000
10. Which of the following statement is false according to the text?
a.    The premiers of the hobbit movies were held in the different places of the same country
b.    The Hobbit movies consists of three epic adventurous film that were released on different years
c.    The first series of The Hobbit wasn’t premiered in Europe
d.    The Third series of the Hobbit was premiered in a country of an European continent