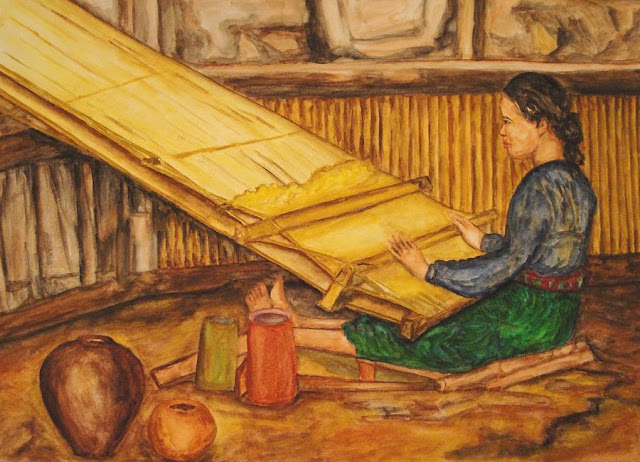 Few days before “hari pantang” ended, the girl asked his brother to look for a fresh chicken craw. After the brother handed her the chicken craw she asked for, then she kept the craw in her room.

The night when “hari pantang” had come. That night, the rich man came to the girl room to do what a husband intended to do on the night of a marriage. Before going to bed, the girl took the craw that she kept and she put the craw between her. Then she came to bed where her husband had been waiting. When she came to the bad, her husband started to touch her. When his hand touched her genital area, he was shocked because it smelled rotten.
Thinking that that the girl had a genital disease, the man walked out of room. And he shouted.

“Oh my God, so gross. How could I marry that girl?”

His father that overheard the shouting then came to the rich man, and asked

“What happened?” asked him

“Father, my wife take a diseases with her and it is so disgusting” said the rich man, then he explained what just happened in the room.

After the rich man and his family had gone from his house, the father as the girl about the reason why the rich man divorced her. Not wanting to reveal what she had done in her room, the girl said that she also didn’t know what had been going on. She said maybe her ex-husband didn’t love her anymore.

Few days later, La Kutttu heard that the weaving girl she loved had been divorced by her husband. Then, La Kuttu visited the girl house. When he reached the house, he saw the girl weaving outside his house. Then, he greeted the girl and asked why she got divorced. The girl then told La Kuttu what had been going on. Knowing the real story, la kuttu than expressed his willingness to marry her.

The girl said that he had to wait for 3 months before he could marry her. And he asked La kuttu in that 3 months periods to look for enough money to purpose her. It was because her father wouldn’t accept the purpose if the man purposing didn’t get enough money.

Then, after 3 months, La kuttu with his family and also with enough money came to the girl house to purpose her. Knowing that la Kutuu was a handsome man and he also had enough money to purpose the girl, the girl family accepted the purpose, and the marriage then was held. Now, the girl was happy to have a huband like la Kuttu. A handsome husband she had been dreaming of.