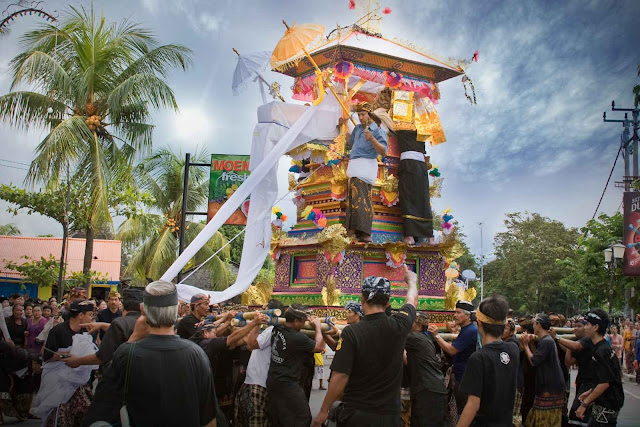 Text 1
Ngaben, or Cremation Ceremony, is a funeral ritual performed in Bali to send the deceased to the next life. The body of the deceased will be placed as if sleeping, and the family will continue to treat the deceased as sleeping. No tears are shed, because the deceased is only temporarily absent and will reincarnate or find final rest in Moksha (freeing from the reincarnation and death cycle).
The proper day of the ceremony is always a matter of consulting a specialist on ceremony days. On the day of the ceremony, the body of the deceased is placed inside a coffin. This coffin is placed inside a sarcophagus resembling a buffalo (Lembu) or in a temple structure (Wadah) made of papier-maché and wood. This sarcophagus is then borne to the cremation site in a procession, which is almost never walked in a straight line. This is done to confuse evil spirits and keep them away from the deceased.
The climax of a Ngaben is the burning of the sarcophagus containing the body of the deceased. The fire is viewed as necessary to free the spirit from the body and enable reincarnation. Ngaben is not always immediately performed. For members of the elite castes, it is normal to perform the ritual individually for the deceased within three days. People of lower social classes opt for a more economic solution where they first bury the deceased, who is then cremated with the village's other dead in a mass ceremony.
1.    What is Ngaben?
A.    Cremation Ceremony to send alive people to the next life
B.    A funeral ritual performed in Java to send the deceased to the next life
C.    Ritual of sending a deceased body to Bali Island
D.   Cremation Ritual performed in Bali to deceased people
2.    What is Moksha?
A.    A place where reincarnation stops
B.    A place where Ngaben started
C.    A place of reincarnation begins
D.   A place where the deceased is sleeping
3.    Why is the sarcophagus never walked in a straight lined?
A.    To confused all spirit
B.    To keep the family from the deceased
C.    To confuse people who watch Ngaben
D.   To keep bad spirit away
4.    …. where they first bury. (Paragraph 3).The word “they” refers to…
A.    Lower classes deceased people
B.    Lower classes people
C.    Elite castes people
D.   The deceased people
5.    Why should the body be burnt in Ngaben?
A.    To make the deceased body turn into ashes
B.    To free the spirit and disable reincarnation
C.    To make the spirit out and get the reincarnation
D.   To keep the body from evil spirit

Text 2
A hot dog (also spelled hotdog) is a cooked sausage, traditionally grilled or steamed and served in a sliced bun as a sandwich. Hot dog variants include the corn dog dipped in corn batter and deep fried, pigs in blankets wrapped in dough, baked, and served as hors d'oeuvres, and Beanie Weenies chopped and mixed with baked beans. Typical hot dog garnishes include mustard, ketchup, onions, mayonnaise, relish, cheese, chili, and sauerkraut.
The sausages were culturally imported from Germany and popularized in the United States, where they were a working class street food sold at hot dog stands that came to be associated with baseball and America. Hot dog preparation and condiment styles also vary regionally across the United States. The hot dog's cultural traditions include the Nathan's Hot Dog Eating Contest and Wiener mobile.
Claims about hot dog invention are difficult to assess, as stories assert the creation of the sausage, the placing of the sausage (or another kind of sausage) on bread or a bun as finger food, the popularization of the existing dish, or the application of the name "hot dog" to a sausage and bun combination most commonly used with ketchup or mustard and sometimes relish.
The world's longest hot dog created was 60 meters (197 ft), which rested within a 60.3-meter (198 ft) bun. The hot dog was prepared by Shizuoka Meat Producers for the All-Japan Bread Association, which baked the bun and coordinated the event, including official measurement for the world record. The hot dog and bun were the center of a media event in celebration of the Association's 50th anniversary on August 4, 2006, at the Akasaka Prince Hotel, Tokyo, Japan. A hot dog prepared by head chef Joe Calderone in Manhattan sold for US$69 during the National Hot Dog Day in 2010, making it the most expensive hot dog sold at the time. The hot dog was topped with truffle oil, duck foie gras, and truffle butter.

6.    Which of the following below that is not the characteristic of a hotdog?
A.    made from a cooked sausage
B.    is  not steamed but traditionally grilled
C.    may be served as a sandwich
D.   may be mixed with a baked beans
7.    Why did the hotdog become popular in America?
A.    Because it was sold in a stand related to baseball
B.    Because the sausage was imported from Germany
C.    Because the preparation is well
D.   Because American people know hotdog very well
8.    How long was the hot dog that broke the record?
A.    Less than 60 m
B.    More than 60,3 meter
C.    Less than 200ft
D.   More than 200ft
9.    The followings are what Shizouka Meat did to break the record, except…
A.    Baking the bun
B.    Preparing for the measurement instrument
C.    Measuring the office of Shizuka Meat
D.   Preparing the event
10. Why the hot dog that was sold in the Hot Dog Day 2010 is declared as the most expensive hot dog?
A.    Because the hot dog was made by head chef Joe Calderone
B.    Because there are many people who bought it
C.    Because there it was sold for US$96
D.   Because it had a highest price for a hotdog ever