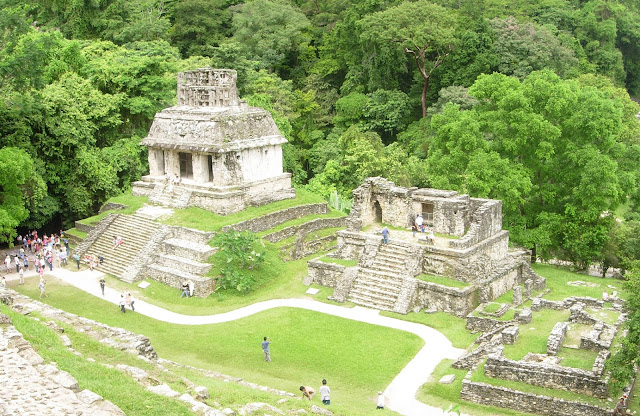 Text 1
The Yucatan is in Peninsula. It’s just into the western Caribbean Sea. The Yucatan is the site of many impressive Maya ruins. Many of the Ruins are amazing, but it is Chichen Itza. Chichen Itza is perhaps the most amazing. Chichen Itza was the most important city in the Peninsula from the 10th to the 12th century.
Chichen Itza filled with structure. These structures are enormous and awe inspiring. For example, at Chichen Itza is an impressive Ball Court. Its acoustics are phenomenal. In fact, the acoustics of the Ball court still baffle scientists and musicians. Scientists and musicians have spent long hours analyzing its construction. Dominating the ruins is the famous 98-foot-tall El Castillo pyramid. El Castillo is the most impressive monument in Chichen Itza. El Castillo is a masterpiece of Toltec-Maya architectural design and genius.
1      1.    The passage is mainly talking about……….
(A) The impressive Maya’s ruins
(B) The structure of Chichen Itza’s Ball Court
(C) The most amazing Maya’ ruin site
(D) The Yucatan
(E)  The famous 98-foot-tall building
2.    From the passage, it can be inferred that…...
(A) The Chichen Itza is located in the west side of Peninsula
(B) Most tourism are impressed by the structure of Ball Court
(C) Chichen Itza is the most amazing ruin’s site in the world
(D) Chichen Itza became an important city of Peninsula in the middle age
(E)  El Castillo has phenomenal acoustic
3.    “…..the acoustics of the Ball court still baffle scientists” The underlined word means……..
(A) Make someone work hard
(B) Make someone interested in something
(C) Make someone hard to believe in something
(D) Make someone impressed of something
(E)  Make someone unable to understand of something
Text 2
Jazz musicians are unique as creative artists. Many poets, painters, and novelists accustomed to working alone, but this is often impossible for jazz musician. Because of the nature of jazz, most of their playing and practicing must be with other musician. They need each other’s sound and impulses to become inspired.
To develop their own styles, jazz musicians must be ingenious and versatile. Playing jazz involves remembering hundreds of musicals phrase and improvising of them during a solo. Each musician’s personal style develops through various ways of improvising.
Some jazz musicians are so skillful at improvising that they can even improvise on their mistake. The late trumpeter Dizzy Gillespie was famous for using any mistake to begin a new improvisation. By using a mistake to begin a new melody, he creates a whole new piece of music.
4.    Why is jazz musician unique?
(A) They are creative artist
(B) They are skillful musician
(C) They are not solitary artist
(D) They are able to make a new music
(E)  They are able to play a good music
5.    What is the main idea of the last paragraph?

(A) Skillful
(B) Smart
(C) Hard-worker
(D) Creative
(E)  Talkative
7.    According to the text, we know that………
(A) Jazz musicians are famous for using any mistakes to begin a new melody
(B) Jazz musicians are solitary artist for not being accustomed to working alone
(C) Jazz musician will improvise any music when they are playing with another musician
(D) The nature of Jazz musician is working alone
(E)  The jazz musician Dizzy Gillespie’s been dead
Text 3
All human cultures possess either spoken or manual language (or both). However not all language have an associated writing system, and it is evident that writing is a much more recent development in the history of humans than speech. Written languages vary widely in their characteristic, but some broad categories can be described.
The minimal unit, or building block, of any written system is the grapheme. Many writing system reflect the phonological properties of the oral language they encode and are thus sound-based. A sound-based writing system that uses individual symbols, or letters, to represent the phoneme of a language is alphabetic. An ideal alphabetic system would include a one-to-one correspondence between phonemes in the language and the symbol used to represent them and enough different letters to represent all the phonemes
Written English system is primarily an alphabetic system, although it is not completely regular in its representation and has many different ways to spell one phoneme. If it were, there would be no point in having spelling bees, because all words would be spelled just as they sound.
8.    What is the best title for the passage
A.    Human language
B.    English writing system
C.    The written language
D.   The language of the world
E.    The system of written language
9.    What is the best conclusion of the passage?
A.    All human race have two kind of language: oral and written
and they have their own characteristic
B.    Not all language posses written form and written form differ in each language
C.    Each languages uses ideal alphabetic language
D.   Human races have either oral or written language or both, and written language have similar characteristic in every language
E.    English has alphabetic system in its writing
10. The meaning of grapheme (paragraph 2) is………
A.    The minimal unit of phonological system
B.    The base form of  the alphabetic system
C.    The written system
D.   The minimal unit of human speech
E.    The little piece of writing system
11. What the following statement is true according to the passage

A.    The development of written language is earlier than oral language
B.    Not all written language possesses grapheme
C.    Spelling bee is established because English written is completely regular representation
D.   Writing system doesn’t reflect the phonological properties of speech language
E.    All language have oral form but not with the symbol