Time by time, year by year, Amat grew up and became a teenager. He always helped her mother with effort he could do. Still, how hard he had tried to work, he still lived in a poverty.
Kruen Raya is a river where there was a harbor at that time. People used to send things from Aceh to another place there. Also, imported goods passed this harbor before they were taken to the place where they were going to use or sell. Aceh merchant was already big at that time. There were lot merchant ship sailing and docking in the harbor every day. The crowds were always seen in the harbor. Hundreds of boxes were being loaded and unloaded. 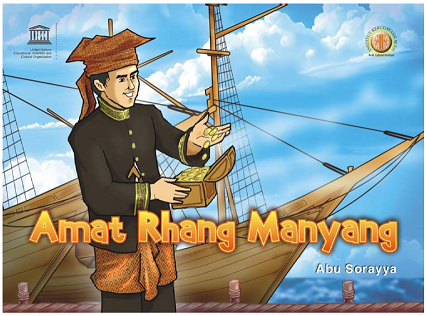 By the time a ship would sail, many paddle were moving in the side of the ship. The paddles were moved from the inside of the ship. As the movement of the paddles got faster, the speed of the ship would be too. As the ship started to leave the harbor, many people that were the family of the ship’s crews would stand in the harbor waving their hands. Such a touching moment it was that many of them would ended up crying. They know that everything could happened when sailing, even the worst one like the ship sank and all the crews died.

When a ship docked in the harbor, many people would wave their hand to welcome their people that had been away from home to sail in the sea. Laughter and happiness filled the air as they meet the ones that had been missed for long time.

Almost every day Amat and his friends would come to the harbor, they usually wanted to see the docking ship. They also frequently saw something that they thought to be weird. Soon, as they saw that, they would tell to their friend in the village.  Besides that, they are also fond and admired the merchants they often saw in the harbor. They admired how they looked like, how good clothes they wore every day. Kind of clothes they had never had neither had they worn in their life. They really wanted to be like them, to have a better life.

Amat then, wanted also to be helmsman. He believed by being a helmsman he could change his and his mother’s life. Though he really wanted to be a helmsman, never had he told it anyone including his mother.

Because of that, he can barely sleep soundly in the night. Every time he was lying on the bed, he would think of being a helms man and it would keep his eyes open for almost all night. He imagined how he would sail a wide sea and also visited another country. He also imagined how his mother would miss him after being away for months. He would buy something for his mother at home. Something that was really special that had never been possessed by his mother before.

One day, when the night almost came, rain fell hard and it made Amat not able to come to Meunasah to recite Al-Quran. He couldn’t recite and sleep in the meunasah like he usually did before. That night, Amat decided to sleep at home. As usual, Amat couldn’t sleep because he was thinking about his future. While his eyes wide opened, Amat looked at his mother that was already sleeping besides him. He could see how his mother’s face looked tires, and also she looked older that her actual age.