March 04, 2015
Hi guys, what's up? Are you all doing fine? well, i hope everything is great. And please do hope for everything does well in my life too. Thank you. Well now, I just woke up from my  heavenly sleeping, and then i decided to write a West Java folklore namely The legend of Tangkuban Perahu. This story is very popular in Indonesia, and I am sure that almost all kids in Indonesia has known or read this story even once. So, for you who had known this story, please enjoy re-reading it again, do not leave from my blog. LOL. And for you who doesn't know this story please sit down, prepare for your popcorn and a glass of wine, I mean a glass of coke and read the story. Again, as always, if you find my English is terrible on this story, please be advised as English is neither my first nor my second language. Well, I think I have talked much. Alright, enjoy and don't forget to be awesome today!!! 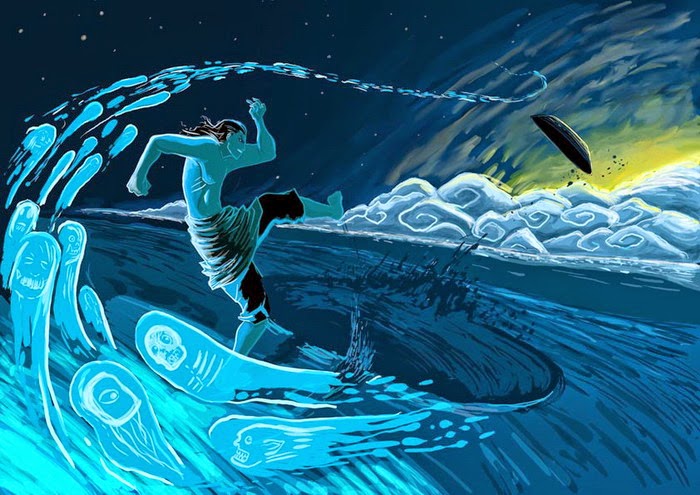 Long time ago, in west Java, there live a princess namely Dayang Sumbi. She had a son whose name is Sangkuriang. Sangkuriang really loved hunting, and every time he hunted in the forest, he was always accompanied by his lovely dog, Tumang, Tumang was actually a god and also his father but Sangkuriang didn’t know that as his mother kept it secret.

One day, Sangkuriang was ready to go to the forest to hunt. Arriving in the forest, Sangkuriang began to look for his prey. He then saw a bird perching on a branch of a tree. Sangkuriang aimed his arrow and his arrow successfully hit the bird. As the bird fell down to the ground, Sangkuriang asked Tumang to take it. Tumang was stay still although Sangkuriang has repeatedly asked him. Feeling pissed off, Sangkuriang then screamed at Tumang saying that he can’t follow him to home.

When Sangkuriang was at home, he told his mother about what happened in forest, and he also told his mother that he had got rid Tumang. Hearing what his son said, Dayang Sumbi was angry. She then took a centong (Centong is a Javanese traditional spoon made of wood used to take a cooked-rice from its place) and hit it to Sangkuriang’s head. Sangkuriang was confused, sad, and disappointed because he didn’t know why his mother suddenly hit him with the centong. He then decided to run away from home and wandered along the forest.

Knowing that his son had ran away, Dayang Sumbi regretted about what she had done. She felt that she had been too hard to Sangkuriang. Dayang Sumbi the prayed that she still had a chance to meet his son again one day. Dayang Sumbi prayed every day, over and over. Gods in the khayangan saw what Dayang Sumbi did and as they felt pity of her, then they granted Dayang Sumbi an everlasting beauty and an ageless face.

After wandered for years, Sangkuriang wanted to return to his home. Then, by the time he arrived to his home he was surprised as the home and also the surrounding had changed. Sangkuriang felt happy because the village at which he was raised when he was child had changed to be a well-developed place. He was happier when he saw a beautiful girl at his house. Sangkuriang had no idea that the girl he just saw was actually Dayang Sumbi, his mother. Sangkuriang was mesmerized of the beauty of the girl. Then he said to the girl that he loved her and he purposed her. Dayang Sumbi didn’t realized that the handsome man that just purposed her was actually his son.

What will happened to Dayang Sumbi, will she finally marry her own son? Oh crap, I couldn’t imagine that. Better wait for the chapter 2.The chapter 2 will be uploaded in a jiffy so, stay tune.