December 06, 2014
In this article, I would like to tell you one of Lampung Folklore or Cerita Rakyat Lampung that happened in Tulang Bawang. As we know, in Tulang Bawang, there flow many big river and one of them is Tulang Bawang River. To read the story in Bahasa Indonesia please click here! 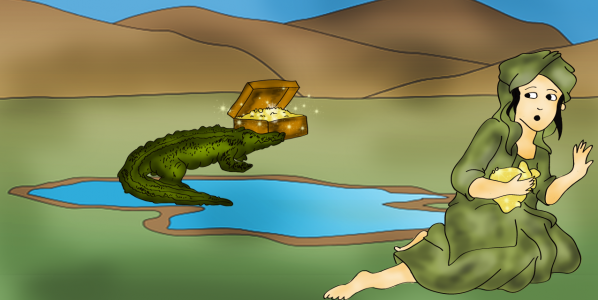 Long long ago, Tulang Bawang river was known for its crocodiles’ ferocity. Every fisherman who passed through this river had to be careful. So did the people who wanted to take a bath or wash their clothes in the river bank. It had been told at that time that many people had disappeared without leaving any footprint.

One day, those horrible incident happened again. A beautiful girl whose name was Aminah suddenly disappeared from the river while she was washing her cloth in the river bank. Oddly, even thought people had been looking for her for days in the river, but they found nothing.  People then stopped looking for Aminah and they considered that Aminah might have been eaten by those crocodiles. Meanwhile, in a palce in the bottom of a river, a girl was lying faintly. She was Aminah. She just woke up from fainting.

“Mother, Father, where am I?’ Murmured Aminah

With all of her vengeance, Aminah tried to stand up. She was shocked when she realized that she was in a cave now. Something that make her even felt more shocked was when she look at the cave wall. There were hung a lot of treasure. She could see that there were diamond, gold, jewel, or even beautiful cloth that sparkled because of the light of torches that were put in the cave corner.
“What a beautiful treasure and cloth they are. So many of them. But whose treasure are they? Said Aminah

Suddenly,  there was a sound of footstep that reverberated from one side of the cave. And then, a big crocodile appeared in the front Aminah. Aminah was shocked and scared. She wanted to run but he felt that she cannot move her feet. Something she could do at that time was only starring that crocodile and moving his lips without producing any words.

“Hi beautiful girl. No need to afraid. All of this is yours” said the crocodile and his head pointing all of the hanging treasure and cloths.

“Who are you actually? You are a crocodile but you can talk like a human” asked Aminah. Her voice was trembling as she was really shocked and scared.

“Calm down girl! You may see that I am a crocodile. But actually I was a human like you. I will turn to be a man in the full moon” said the crocodile

“So why did you turn to be a crocodile?’ asked Aminah wanted to know

“Well, It is because I did something bad in the past. My name is Somad actually. I was a robber that lived in the Tulang Bawang river bank. I always robbed the merchants’ belonging that passed through this river. And I save all of the spoils in this river. Explained the crocodile

“Then, how if you were hung. What would you do?” asked Aminah Again

“If I need food supply, I will sell this treasure in the market near Tulang Bawang River. I sell it when the full moon comes, so no one knows that I am actually a crocodile. Something that they know is that I am just an ordinary man that trade his jewel for money. Moreover, I build a canal behind this cave and this canal connect the cave with the villag” revealed the crocodile.

The crocodile had talked a lot. And he didn’t realized that he had revealed the secret of the cave . He had told the girl about the canal. Knowing the secret about the canal. Then Aminah didn’t want to waste the chance that she just got. Aminah listened to every explanation given by the crocodile. She tried to put the all in their memory so she could use them to escaped one day.

“My name is Aminah. I live in a village near Tulang Bawang river” answered Aminah “Hi crocodile, can I ask you something” now Aminah was brave enough to talk to the crocodile

“Yes please, What is it? Just ask me” said the crocodile

“Why did you kidnap me” asked Aminah

“Aminah, you should know that I kidnap you because you are beautiful and I like you. That is also the same reason why I didn’t eat you. I would like to ask you to live with me in this cave” Answered the croc

“But crocodile, I am sorry, I think I cannot liv with you here, in this cave” refused Aminah

“Well, Aminah, if you wanted to live with me I will promise you all of my treasure here. But if you at last still refuse my offer, I will eat you” threatened the croc

Aminah was as shocked as she heard the crocodile’s threat. But she didn’t lost her mind. She still look for another idea to escape from the cave.

“Well, fine. I agree to stay here with you’ said Aminah

Aminah accepted the offer because didn’t want that crocodile eat her and also by living in the cave, Aminah could have time to prepare her plan to escape.

One day, when the crocodile was sleeping soundly in the cave Aminah was walking around the cave. She found that the door of the cave was let open by the croc. Knowing that, Aminah didn’t want to lose her chance. ‘It is my only chance to escape” said Aminah

Then, Aminah tried to recall her conversation with the croc while ago about the canal. With a very careful move, Aminah then walked toward the door and headed to the canal. Aminah didn’t bring any treasure or clothes in the cave. She only got what she wore.  After looking for a while, Aminah finally found the canal. She then walked along the canal. The canal was so dark, she hardly see something through the canal. Aminah walked carefully, she was afraid if she met another crocodile in that canal.

Finally, Aminah see a light ahead. Aminah was so glad because that light indicated that she was near to the end of the canal. Finally Aminah reached the end of the canal and that canal took Aminah to the forest. She then stepped out of the canal, Aminah was as glad as she could saw the outside world again. “Thanks God, I was safe from the crocodile threat” said Aminah gladly

After that, Aminah wandered the forest. After walking for a while, Aminah meet a man of her village. That man hardly know Aminah now.

“Hi girl. Who are you? What are you doing in the forest all alone? Asked the man

“I am Aminah sir” answered Aminah. Then, Aminah told everything happened to her and also she told about the crocodile. Afterwards, that man took Aminah to her house. When ahe arrived home, Aminah gave jewel in his hand and neck to the man. The man was really happy.

Knowing that Aminah was back. All people in her village was shocked and also happy. Then Aminah also told everything to the people about what happened to her. Since then, People in Tulang Bawang always takes a careful move when they are taking bath or washing their clothes in the river.