December 10, 2014
To read the story in Bahasa Indonesia please clik here!
The Legend ofPutri Tangguk||JambiFolklore||Part 2
A long time ago, In Danau Kerinci district in Jambi, lived a woman named Putri Tangguk. She lived with her husband and her seven children. To feed the family, she and her husband cultivated a ricefiield and planted paddy there. 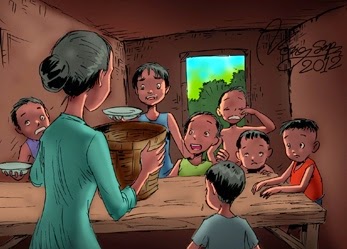 She and her husband only planted paddy for one tangguk (Tangguk means an area of a ricefield whose width is about a garden bed). Even though they only planted paddy for only one tangguk, the paddy that they got from their ricefield was a lot. Everty time, the paddy plants were harvested, they kept producing grists. So they can harvest the paddy plants thy were planted for many times.
Because of their industrious and hard work, the seven rice barns in their house were almost fully filled. But, due to their hard working, they often forgot to take bath, they also forgot to greet or chat with their neighbor, and they even forgot to take care their children.

One night when their seven children had been sleepin, Putri Tangguk talked to her husband.

“My husband, I am really tired today. I am really tried to work every day on the rice field. I want to take care our children at home, also I want to great and chat with the neighbor. I felt that our family is being expelled as we never socialize with others.

“Then, what is your plan?” answer the husband with a low voice.

“Well, for tomorrow, I need to get the seventh rice barn filled. So that we have enough food supplies for next couple months” answered Putri Tangguk telling her plan

“Well, alright. We need to work hard tomorrow to get the barn fully filled. We should ask the children for a help then.” Said the husband

Then, after have that short conversation, Putri and her husband felt asleep. They slept very soundly as they were really exhausted of their daily work. In the middle of the night, a heavy right fell. The rain just stopped when the dawn came. The road in the village and the path in the rice field was wet and slippery.

“What a bloody path, make me fall” said Putri Tangguk “I will cover the path with the grist we just picked so the path won get slippery any longer”

After harvested the grist, Putri Tangguk poured the grist they got to cover the path. Almost all the grist was used. They only brought a little grist home. As what she said before, after that day Putri Tangguk stopped to work in the rice field. Now, he filled her day by weaving clothes. She made clothes for her husband, children and for herself.

One day, Putri Tanggu was really enjoying her weaving till she forgot to cook food for dinner. Putri Tangguk kept weaving until night. Then, when she fel tired she stopped what she did and slept besides her children.

In the middle of the night, the youngest child was awaken because he was starving. Then, he cried and asked for food. Luckily, Putri Tangguk can persuade him to stop crying and sleep again. One by one her children were awaken and asked for food, and one by one of them were able to be persuaded to have a sleep again. Now, it’s time for the oldest son to wake up and ask for food. When Putri Tangguk knew that, she didn’t do the thing she done to her other six children. Now, she scolded her oldest child.

“Mother, there is nothing left to cook. Would you please help me to pound the grist in the barn” aske the eldest to his mother.

“What did you just say?! There is nothing left to cook?! As I recall, there is a cold rice in the pan. Also there is pounded grist in the can and those grist can be cook for two portion. Now you said there was nothing left. I am sure someone had stolen them” said Putri Tangguk.

“Well then, please control your gusto. I felt last to pund grist and cook rice in the middle of night like this also, the neighbor can be disturbed if I pound rice in this time!”

Then , Putri Tanggu was back to sleep, and so was her eldest son that had to sleep in starve.