December 06, 2014
This Folklore or Cerita Rakyat happened in a place in Jambi Province, Indonesia. The story tells about the life of Putri Cermin Cina. This story is written in English and to read story in Bahasa Indonesia please click here! 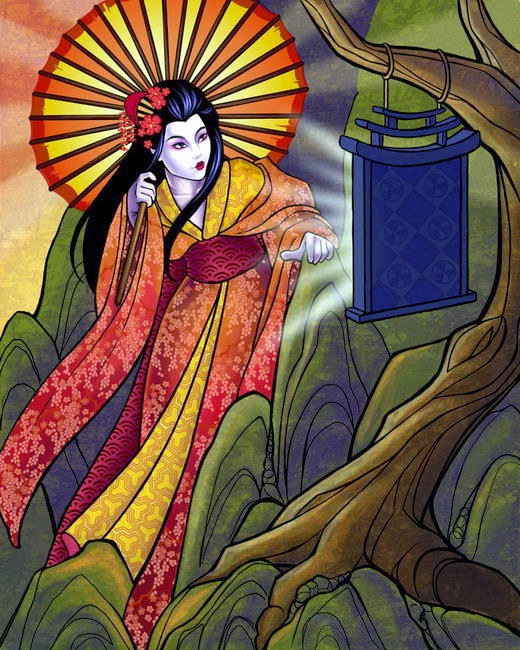 Long time ago, there was a kingdom in Jambi that was ruled by a king named Sultan Mambang Matahari. Sultan Mambang Matahari had a son named Tuan Muda Selat and a daughter named Putri Cermin Cina. The son of the king was handsome but he was such a reckless boy while the daughter is beautiful. She had a white skin like a Chinese girl and because of the skin she had then she was call “Putri Cermin Cina”.

One day, Tuan Muda Senaning talked to Putri “My love Putri, since I met you on that banquette I have already known that you are the one. This heart cannot lie to me. My love, I have a vision as if I can see our future. We will be together. Thus, my love, Putri would you like to marry me” asked Tuan muda purposed Putri Cermin Cina

“If you really love me Tuan Muda, then I ask you to come to my father. I want you to ask his permission to marry me” said Putri Cermin Cina blushingly.

“I can manage that my love. But before I do so, I really wanted to know, Do you love me my princess?’ asked him

“No need to tell you about my feeling Tuan Muda. You had already known the answer” answered Putri Cermin Cina

Then, Tuan Muda Senaning managed to meet the king Mambang Matahari. When he was in front of the king, he told his intention to purpose the daughter, Putri Cermin Cina. The king saw the determination from Tuan Muda Senaning. Then He gave Tuan Muda his permission. As he already got the king’s permission, then Tuan Muda started to set a plan to his weeding and also his future life with Tuan Putri. Tuan Muda set the plan very careful, he didn’t want to ruin it especially in front of the king. Then, Tuan Muda set the sail to continue his business.

Inside the palace, Putri Cermin Cina was shocked when she heard her brother’ laugh. Putri was wonder about what was going on. Then she walked towards the window to see what happened. She opened the window and looked outside through it.

Meanwhile, Tuan Muda Selat was confused about what was happening. He was afraid. He didn’t know what to do. Something he knew was that the king would be furious if he knew what happened. Tuan Muda Selat can only scream for help. Then, the kingdom family and royal soldiers came to give a help. They then took care of Putri Cermin Cina and Tuan Muda Senaning’s bodies.

The funeral was done concurrently with the arrival of the king from his sail. Knowing that his daughter was dead, the king was so sad, but then he turned to be furious when he knew the cause of his daughter’s death. He then cursed the place where Putri Cermin Cina was killed.

“You are the one to blame, Selat! You cause your sister to death. I, then, shall curse the place you were playing to be Kampung Selat (Selat village).”

Then, to forget this terrible incident, the king decided to build a new palace. He left his old palace uninhabited. The king chose a place between his old kingdom or now is known as Kampung Selat and the place when he leaned his ship from sailing. His new kingdom was then named as Kampung Tengah Lubuk Ruso.

Until now, that places are still exist in Jambi. And Jambi people still believe that the story of Putri Cermin Cina and her terrible death is real.
That’s is the folklore or cerita rakyat from Jambi. See you in the next cerita rakya (folklore).