December 11, 2014
To read the story in Bahasa Indonesia please click here!
Nyi Roro Kidul is a very well-known mystical figure in Indonesia. She is believed to live in the sea of southern Java. Before being the ruler of the sea, Nyi Roro Kidul is just an ordinary girl who live in a kingdom along with her mother, the queen of the kingdom. Then, how do the fate change her to be what she is now? Let’s read the story. 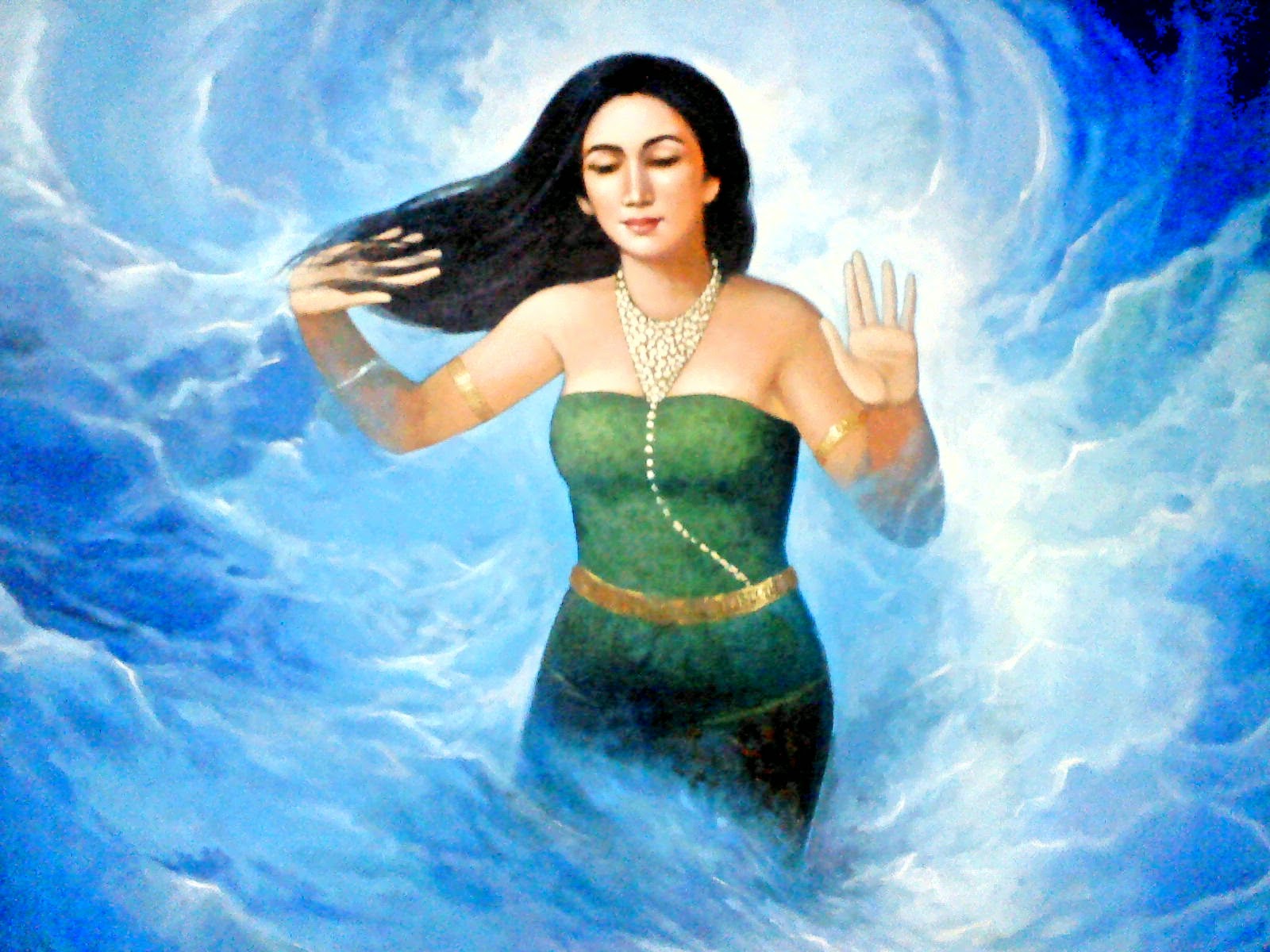 Long time ago in West Java, There was a big kingdom ruled by a man named Prabu Siliwangi. Prabu Siliwangi was known as a king that was wise. He has a queen and also some concubines.

One day, his queens was pregnant and she was going to deliver a baby. Then, when the baby was born, she looked so beautiful. Prabu Siliwangi and his queen was so happy to have a very beautiful baby then he named the baby “Putri Lara Kadita”. Fortunately, the concubines felt so envy to the baby as the king now gave his attention to the queen and the baby more than he gave to them. The baby become more beautiful as she grew up and when she turned to be a girl, she became more beautiful even compared to her mother, the queen. The king then decided to make Putri Lara Kadita to be a heir apparent, the one that will rule the kingdom after the king.

Then, because of that horrible condition, The King sent them out of the kingdom. The king said that if they stayed in the kingdom with that faces, they can bring a bad luck to the kingdom. Then the queen and Putri Lara Kadita left the kingdom. The wandered to nowhere, they didn’t know where to go. They just kept wandering. They always chose a lonely road as they felt shy if they had to meet people in the middle of the way. They were afraid to scare them. They had to survive in their loneliness. One day, the queen cannot bear her burden anymore, the disease in her face had taken her life. Since then, Putri Lara Kadita had to survive all alone. She had to bear the burden without having someone to share. Putri kept walking to the southward of the kingdom.

One day, Putri Lara fainted because she hadn’t eaten all day long. When she awoke from her blackout, she found herself in a place where she heard the sound of sea wave. The sound then make her enthusiastic to continue her journey. Then, after walking for a while, Putri saw a beautiful seashore ahead. The seashore had a big wave and big reefs. Then, Putri walked toward a reef and sit on the top of the reef as she had reached it.

When sitting on it, Putri was sleep and felt asleep. When she was sleeping, she had a dream. The dream showed Putri the way to cure her face and body from the disease. The dream told Putri to jump and sink herself on the sea if she wanted to be as beautiful again as before.

As Putri woke up from her sleep, then she tried to recall what she had dreamt. Then, after she recalled what the dream told her to do, Putri Lara jumped of the reef to the sea and sank herself on the water. When she did it, magically, all of the disease disappeared and she became as beautiful as before. Since that day, Putri lived in that sea and then she became the ruler of the sea and the southern Java area. Now she is known as Penguasa Pantai Selatan (The ruler of the south coast) or in Javanese she is called as ‘Nyi Roro Kidul.

Note: The story telling the legend of Nyi Roro Kidul is available on every province in Java. Then, the story provided here is the story from West Java