The Legend of a Gold Snail Princeess || East Java Folklore


Hundreds years ago, There live a couple of Putri Galuh Condro Kirono from Jenggala Kingdom, and Raden Panji Inu Kertapati from Daha Kingdom who loved each other so much. 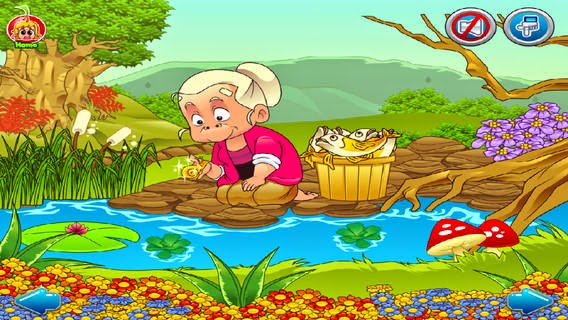 Unfortunately, their joy of love was disturbed by the the arrival of a king from a “nowhere” kingdom who at that time visited Jenggala Kingdom and wanted to purpose Putri Galuh Condro Kirono as his wife. Putri Galuh who didn’t wanted to marry with that king then decided to escape from the palace, and she lived in the village. Then she disguised herself by changing her name to be “Dewi Sekartaji”.

The King of gods which was Barata Narada in the sky knew what happened to Putri Galuh. Then, by using his magical power he helped Putri Galuh or Dewi Sekartaji to disguise. He, then, turned her to be Keong Mas (gold snail). Then with a guidance from Brata Narada, the Gold Snail then continued her journey. The Gold Snail wandered along the river and the valley. One day in the river, the Gold Snail was relaxing on a top of a river stone. The sparkling of her golden body amazed an old widow that was passed along theriver. Then, the old widow took the gold snail and brought it home. The old widow’s name was Mbok Rondo Dadapan. She took the gold snail because she wanted to raise it at home. In her home, Mbok Rondo Dadapan put the golden snail into a water jar.

In the following day, Mbok Rondo Dadapan went to river to look for fish. She went to the river at morning and back home at noon. When she arrived at home, she was confused and amazed as she saw her home was alreay clean and neat. She recalled that she hadn’t cleaned her home when she went to the river.
“Who is a kind person who wanted to clean and tidy uo my home” murmured Mbok Rondo Dadapan

In the next day, when she arrived at home from the river, the same thing happened again in her home. The home was already clean and tidy, and it kept happening for days. The one day, Mbok Rondo Dadapan decided to reveal the person who had been cleaning her home all this time. Then Mbok Rondo pretended to went to the river while in fact she hide in in the back of her home. She spied through a small hole from his home’s wall that was made from woven bamboo.

Then she was surprised of what she was seeing in her kitchen. The snail she put inside the water jar, climb up the jar and as it was already out, it turned to be a beautiful woman. Then, that beautiful woman cleaned and tidied up all the room in the home. Then when the beautiful woman almost finished what she did. Mbok Rondo hurriedly walk to the front door, and she went inside home. When she was already inside she found nothing but a broom that was lying beside a water jar. When she checked the water jar, she found a gold snail in the bottom of the jar. 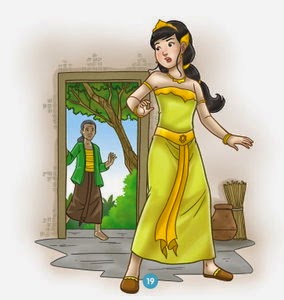 This time, Mbok rondo didn’t succeed to catch the beautiful woman red handed doing her cleaning job. In the next following day, Mbok Rondo did the same thing as she did in the previous day. Hide herself on the back of her home. Then when the beautiful woman, came out of the gold snail’s shell, and just began her cleaning home. She rum through the front door and directly walked to the kitchen. She took the shell and broke it on pieces.  The beautiful woman that saw what just happened, was surprised and she said nothing. Then, Mbok Rondo asked her
“Who are you, how can you came out of the gold snail’s shell? Asked Mbok Rondo wanted to kno
"I am sorry Mbok,  I am actually a princess of Jenggala Kingdom that runway from the place? Answered the beautiful woman sadly.

“Runaway? But why? I thought the lives in the palace is way much better than lives in outside or here? Asked Mbok Rondo

“It because there is a king who visited the kingdom and wanted to marry me. I do not love him. So I decided to runaway otherwise he would force my father to get me marry him” explained the beautiful woman

“Who is your name, then?” asked Mbok Rondo again

“In the palace, they call me Putri Galuh Condro Kirono, but I simply change my name when I was outside to be Dewi Sekartaji. You can call me as you like” said the beautiful woman.

Meanwhile in the Daha kingdom, Raden Panji Inu Kertapati was mourning as he knew that his lover ran away from her palace. Raden Panji cannot bear to not meet Putri Galuh any longer, so he decided to look for Putri Galuh through villages and forests. Raden Panji visited one by one village near his kingdom. Raden Panji disguised and change his name to Raden Panji Asmorobangun He asked people there about Putri Galuh but no one ever saw her.

Because of tired, Raden Panji then stopped and ate at “kedai” (a place where people in the place sold food). Then while he was having a breakfast, he heard a conversation of three man that sitting in the table behind him. The conversation told him that there was a very beautiful woman in the village near the river. Then, have a feeling that the woman the three man talked about was the woman he was looking for, he then rushed his horse to that village. As he arrived in the village, he asked people there about the beautiful woman. Then people pointed the house of Mbok Rondo Dadapan and told that she lived there.

Raden Panji knocked the house of Mbok Dadapan. Tears was falling from his face as he saw who opened the door. There was standing a beautiful woman that he loved so much. Putri Galuh also cannot believe of what see saw. He then hugged Raden Panji, they then cried in happiness.

Then, they sat together in the home and Putri Galuh told everything about a king who wanted to marry her, her transformation to be a fold snail, and also about Mbok Rondo Dadapan. While he was having a chat, Mbok Dadapan entered the house from the river. He was surprised as he saw a man in her house. Putri then told that he is her lover and about to marry. He is the king of Daha.