This story is provided in two language: Bahasa Indonesia and English. Story in English is provided First and story in Bahasa follows. 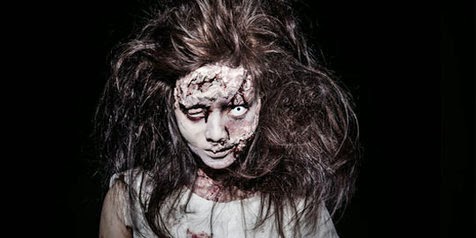 I knew this story from a friend of mine. This is the story.

It took a long time to get there. By the time they arrived in the waterfall, they sat together and felt the beauty of the waterfall. Sumiati’s boyfriend was really happy, he looked at the Suamiati’s beautiful face. Her boyfriend then, asked Suamiati to make a love. Hearing that kind of request, Suamiati was shocked and refused to make a love as she wanted to keep her virginity until her marriage. Suamiati’s boyfriend was blinded by his sexual desire and insisted Suamiati to do what he asked her to do. As Sumiati kept refusing, the boyfriend decided to rape Suamti. While being rape, Suamti kept screaming and yelling. Feeling Angry, the boyfriend punched and hit Suamti and unfortunately Suamiati was dead because of that brutal actions. Confused and didn’t what to do as he found Suamti was dead, the boyfriend then decided to mutlate Suamiati’s body.

Since then, the spirit of Suamiti keeps haunting people around. The Suamiti’s ghost frequently appears and shows her scary face to people especially to men.

Two years ago, the brother’s friend of my friend lets say his name is Broto, was riding his motorcycle along his way home. He just off from his office at that time and the time was in the middle of the night. It was actually at 2 P.M. The road was so lonely in the middle of the nigtht, there was no other motocycle’s rider, nore were there people that walked along the road. While he was focusing on his riding, at a sudden he saw a girl waving her hand as if she wanted to stop him and ask for a load.

Feeling scared, Broto tried to ignore the woman. He thought how can a woman all alone in the middle of the night standing along in the road. Broto didn’t see the woman as he passed her. He continued look ahead and ride the motocycle. 30 seconds after that, Broto was scared to death as he again saw a girl waved her hand ahead. Now he mad bold to see the woman. Nothing wrong, beautiful and didn’t have a scary face. But, as he looked into her feet, Broto screamed as loud as he could as the woman’s feet didn’t step on the ground. Her feet was floating above the ground.

Broto speeded up his motocycle. His feeling told that something wrong wasn’t over yet. That was true. Through the spy of his motorcycle, Broto could see that the woman he just saw back there now flew behind him and she chased him. Broto was panic, he then, now he speeded up the motorcycle even more.

Broto now glanced at the spy and he didn’t see the woman behind him. He felt a little bit relieved. Suddenly, the woman was back. She was now floating in the front of his motorcycle. Broto automatically stopped his motorcycle, but he could run or even move his body. Now, he clearly saw how the bautifl face of the woman turned to be rotten face that was covered by a black thick blood. Putrid scent was smelled from the woman. As he looked the woman into her eyes, he saw that the woman’s eyes was really scared. They were red and big. They were completely red. Fortunately, Broto, then, recited some of Al-Quran verses and the ghost disappeared. Broto then ride his motorcycle home in a very fast speed.

Then, the rumor of Suamti’s ghost has grown fast. Even though we cannot make sure whether the ghost s really Suamiati or not, but because she frequently appears on the area near the Suamti’s house then we assumed that she is Suamiati. The beautiful girl who was rapped and killed by her boyfriend.