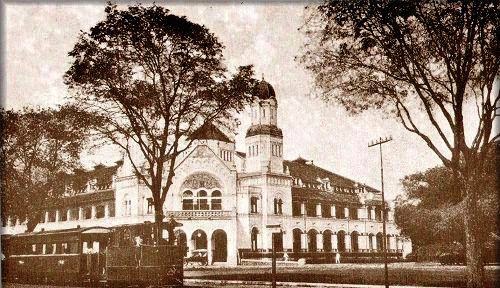 Lawang Sewu, is a bulid that is situated in a city in Central Java that is Semarang. Lawang Sewu that had started to be built in 1904 and finished in 1907 used to be used as an office of NIS (Nederlands-Indische Spoooweg Maatschappij) that is a Nederland Train Company that operated in Indonesia at colonialize time.

As an old building, lawing Sewu has its own spooky story. Many paranormal activities has been reported from this place. A scream, a voice of woman crying, an appearance of a Dutch soldiers, have been a part of story that cannot be separated from this place. Lawang Sewu has reached the peak of spooky place popularity in central Java. Rumor has it that lawing Sewu is actually a place of Dutch and Japanese as people who accidently saw a ghost in this place always said that the ghost always used a Dutch or Japanese soldier uniform.

The ghosts of Japanese soldiers are reported to be seen in a room in the building frontage. They, according to people that have seen them, are Japanese soldiers that looks cruel. They have no nice place, no smile and also they have a long moustache. They bring a samurai in their hands.

Not only there is an appearance of a Japanese soldiers, voices of a woman screaming is also a common thing you will find in this place. The voice is told to be a voice of woman that screams in pain. The voices is sometimes followed by a voice tramps of boots. Sometimes, when you are “lucky” enough, you will see a long-haired woman that is walking along the building corridor who has dim illuminations. The woman is told to walk with an empty stare, and as you look at her, she will gives you a scary and threatening face expression.

In the building crypt, there were jails and bunkers. That Bunker was used to imprison Indonesian people or enemies. This jail is called “standing Jail” by Indonesia people. Why? because the prisoners put in this jail had to stand crammed as this place is really narrow. Its width is only 60cmx 1m and commonly, there would be 5 or 6 people that were forcedly put inside the jail. People who was thrown in this jail would commonly die in a short time, and those who still alive after the other’s died would be chopped in his head. The chopped head then would be thrown on the river flowing besides the building. Now, sometimes the scent of the blood or the corpse will be smelled when you are in this place though now the place has been cleaned.
Moreover, if you sit all alone in this place and wait for a little longer, then you will get a little “gift”. You will see a green-eyed creatures that’s is believed to crawl in the building ceiling. That creature will crawl to everyone who successfully see it. So, if you successfully see this creature then I suggest to wear a running Nike shoes.

Besides the jails in the crypt, there is a torture chamber. This chamber is a place of head-chopping. In this place is believed to a “nest” of chopped-head people’s spirits. The spirits in this place sometimes show their appearance in a very breath-taking form. They will be seen as a person who walk and bring their own head in their hand.

From the crypt, we move to the front yard of the building. In the front yard, you will see an old well. This well will give wrenching screams at night. The scream of soldiers, Dutch soldiers more precisely. This well, in the past, was used as a place of killed Dutch soldiers to be buried. .  History tells us that when Indonesia was colonialized by Japan, many Dutch soldiers were murdered in this place.

Well, that is a few stories of Lawang Sewu. Why do I say “a few”? Because I believe this place still has more than a thousand untold storied that we do not know. So if you want to reveal those stories, don’t be hesitated to visit Semarang, Indonesia.