Brabo and the Giant (English Version)

December 05, 2014
This story is written in English. To read the story in Bahasa Indonesia please clickhere! 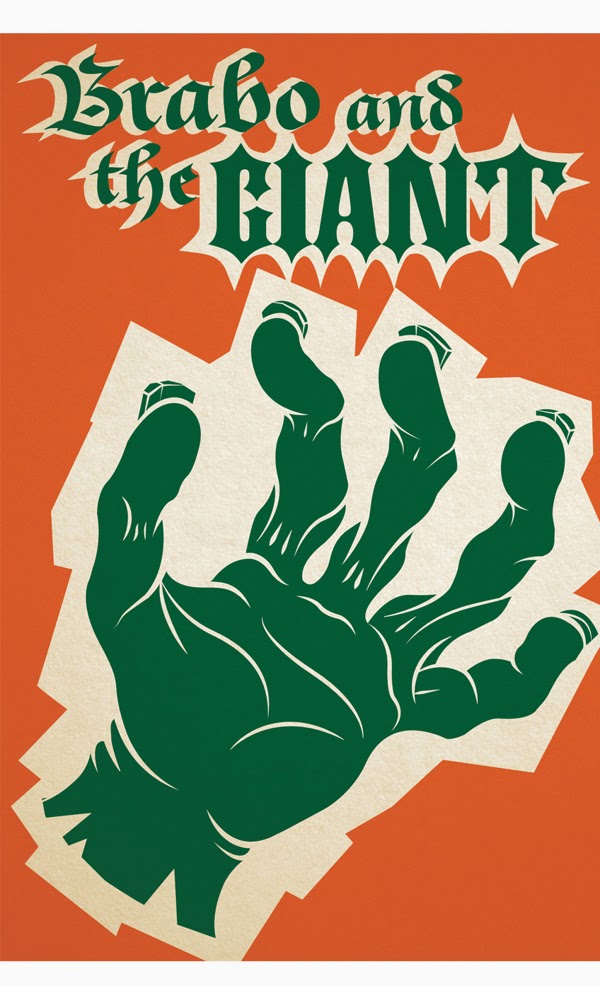 Ages ago, when the giants were numerous on the earth, there lived a big fellow named Antigonus. That was not what his mother had called him, but some one told him of a Greek general of that name; so he took this for his own. He was rough and cruel. His castle was on the Scheldt River, where the city of Antwerp now stands. Many ships sailed out of France and Holland, down this stream.


They were loaded with timber, flax, iron, cheese, fish, bread, linen, and other things made in the country. It was by this trade that many merchants grew rich, and their children had plenty of toys to play with. The river was very grand, deep, and wide. The captains of the ships liked to sail on it, because there was no danger from rocks, and the country through which it flowed was so pretty.

So every day, one could see hundreds of white-sailed craft moving towards the sea, or coming in from the ocean. Boys and girls came down to stand in their wooden shoes on the banks, to see the vessels moving to and fro. The incoming ships brought sugar, wine, oranges, lemons, olives and other good things to eat, and wool to make warm clothes. Often craftsmen came from the wonderful countries in the south to tell of the rich cities there, and help to build new and fine houses, and splendid churches, and town halls. So all the Belgian people were happy.

But one day, this wicked giant came into the country to stop the ships and make them pay him money. He reared a strong castle on the river banks. It had four sides and high walls, and deep down in the earth were dark, damp dungeons. One had to light a candle to find his way to the horrid places.

What was it all for? The people wondered, but they soon found out. The giant, with a big knotted club, made out of an oak tree, strode through the town. He cried out to all the people to assemble in the great open square.

"From this day forth," he roared, "no ship, whether up or down the river, shall pass by this place, without my permission. Every captain must pay me toll, in money or goods. Whoever refuses, shall have both his hands cut off and thrown into the river.

"Hear ye all and obey. Any one caught in helping a ship go by without paying toll, whether it be night, or whether it be day, shall have his thumbs cut off and be put in the dark dungeon for a month. Again I say, Obey!"
With this, the giant swung and twirled his club aloft and then brought it down on a poor countryman's cart, smashing it into flinders. This was done to show his strength.

So every day, when the ships hove in sight, they were hailed from the giant's castle and made to pay heavy toll. Poor or rich, they had to hand over their money. If any captain refused, he was brought ashore and made to kneel before a block and place one hand upon the other. Then the giant swung his axe and cut off both hands, and flung them into the river. If a ship master hesitated, because he had no money, he was cast into a dungeon, until his friends paid his ransom.

Soon, on account of this, the city got a bad name. The captains from France kept in, and the ship men from Spain kept out. The merchants found their trade dwindling, and they grew poorer every day. So some of them slipped out of the city and tried to get the ships to sail in the night, and silently pass the giant's castle.

But the giant's watchers, on the towers, were as wide awake as owls and greedy as hawks. They pounced on the ship captains, chopped off their hands and tossed them into the river. The townspeople, who were found on board, were thrown into the dungeons and had their thumbs cut off.

So the prosperity of the city was destroyed, for the foreign merchants were afraid to send their ships into the giant's country. The reputation of the city grew worse. It was nicknamed by the Germans Hand Werpen, or Hand Throwing; while the Dutchmen called it Antwerp, which meant the same thing. The Duke of Brabant, or Lord of the land, came to the big fellow's fortress and told him to stop.

He even shook his fist under the giant's huge nose, and threatened to attack his castle and burn it. But Antigonus only snapped his fingers, and laughed at him. He made his castle still stronger and kept on hailing ships, throwing some of the crews into dungeons and cutting off the hands of the captains, until the fish in the river grew fat.

Now there was a brave young fellow named Brabo, who lived in the province of Brabant. He was proud of his country and her flag of yellow, black and red, and was loyal to his lord. He studied the castle well and saw a window, where he could climb up into the giant's chamber.

Going to the Duke, Brabo promised if his lord's soldiers would storm the gates of the giant's castle, that he would seek out and fight the ruffian. While they battered down the gates, he would climb the walls. "He's nothing but a 'bulle-wak'" (a bully and a boaster), said Brabo, "and we ought to call him that, instead of Antigonus."

The Duke agreed. On a dark night, one thousand of his best men-at-arms were marched with their banners, but with no drums or trumpets, or anything that could make a noise and alarm the watchmen.
Reaching a wood full of big trees near the castle, they waited till after midnight. All the dogs in the town and country, for five miles around, were seized and put into barns, so as not to bark and wake the giant up. They were given plenty to eat, so that they quickly fell asleep and were perfectly quiet.

At the given signal, hundreds of men holding ship's masts, or tree trunks, marched against the gates. They punched and pounded and at last smashed the iron-bound timbers and rushed in. After overcoming the garrison, they lighted candles, and unlocking the dungeons, went down and set the poor half-starved captives free. Some of them pale, haggard and thin as hop poles, could hardly stand. About the same time, the barn doors where the dogs had been kept, were thrown open. In full cry, a regiment of the animals, from puppies to hounds, were at once out, barking, baying, and yelping, as if they knew what was going on and wanted to see the fun.

But where was the giant? None of the captains could find him. Not one of the prisoners or the garrison could tell where he had hid.

But Brabo knew that the big fellow, Antigonus, was not at all brave, but really only a bully and a coward. So the lad was not afraid. Some of his comrades outside helped him to set up a tall ladder against the wall. Then, while all the watchers and men-at-arms inside, had gone away to defend the gates, Brabo climbed into the castle, through a slit in the thick wall. This had been cut out, like a window, for the bow-and-arrow men, and was usually occupied by a sentinel.

Sword in hand, Brabo made for the giant's own room. Glaring at the youth, the big fellow seized his club and brought it down with such force that it went through the wooden floor. But Brabo dodged the blow and, in a trice, made a sweep with his sword. Cutting off the giant's head, he threw it out the window. It had hardly touched the ground, before the dogs arrived. One of the largest of these ran away with the trophy and the big, hairy noddle of the bully was never found again.

But the giant's huge hands! Ah, they were cut off by Brabo, who stood on the very top of the highest tower, while all below looked up and cheered. Brabo laid one big hand on top of the other, as the giant used to do, when he cut off the hands of captains. He took first the right hand and then the left hand and threw them, one at a time, into the river.

A pretty sight now revealed the fact that the people knew what had been going on and were proud of Brabo's valor. In a moment, every house in Antwerp showed lighted candles, and the city was illuminated. Issuing from the gates came a company of maidens. They were dressed in white, but their leader was robed in yellow, red, and black, the colors of the Brabant flag. They all sang in chorus the praises of Brabo their hero.

"Let us now drop the term of disgrace to the city--that of the Hand-Throwing and give it a new name," said one of the leading men of Antwerp.

"No," said the chief ruler, "let us rather keep the name, and, more than ever, invite all peaceful ships to come again, 'an-'t-werf' (at the wharf), as of old. Then, let the arms of Antwerp be two red hands above a castle."

"Agreed," cried the citizens with a great shout. The Duke of Brabant approved and gave new privileges to the city, on account of Brabo's bravery. So, from high to low, all rejoiced to honor their hero, who was richly rewarded.

After this, thousands of ships, from many countries, loaded or unloaded their cargoes on the wharves, or sailed peacefully by. Antwerp excelled all seaports and became very rich again. Her people loved their native city so dearly, that they coined the proverb "All the world is a ring, and Antwerp is the pearl set in it."

To this day, in the great square, rises the splendid bronze monument of Brabo the Brave. The headless and handless hulk of the giant Antigonus lies sprawling, while on his body rests Antwerp castle. Standing over all, at the top, is Brabo high in air. He holds one of the hands of Antigonus, which he is about to toss into the Scheldt River.

No people honor valor more than the Belgians. Themselves are to-day, as of old, among the bravest.

The story is taken from here!
World Folklore
Location: Indonesia